Have you shopped Peter’s Square? It’s like Etsy, but Catholic 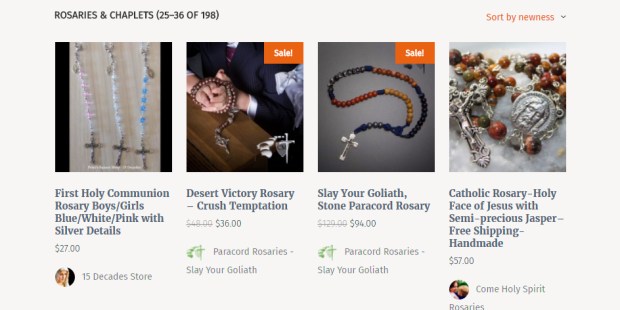 Products aren’t specifically religious, but all the vendors are committed to giving 5 percent of profits to charity.

Not long ago I was looking for some Catholic-themed thank you notes. I easily found some online, but what I didn’t like was that the site I purchased them from also sold garbage … stuff antithetical to the Catholic faith.

That same experience was partly what was behind the start of a new online community of Catholic stores: Peter’s Square. Anything contrary to the faith isn’t sold in this online marketplace.

There’s something else I love about the website: All vendors must commit to giving at least 5 percent of net profits to a Catholic ministry, charity, or parish. There’s no monitoring or verification; it’s simply a commitment based on trust, expected to be filled in good faith.

Peter’s Square launched in May of 2016, and features handmade Catholic items from artwork to t-shirts to rosary pouches. The site currently has more than a hundred approved vendors and 63 active shops. Checking out Peter’s Square, I came across handmade dolls — baby Jesus, the Blessed Mother, St. Joseph, and other saints — beautiful handpaintings and other artwork, beeswax candles, unique rosary beads and cases, Scripture-inspired note cards, and linen hand towels.

As founder  David Rummelhoff explained to Regina Magazine: “A couple years ago, I started the company behind Peter’s Square — Peter’s Mark — as a way for me to contribute to the work of the many amazing Catholic charities that, I believe, are not supported enough. I soon discovered that there are thousands of small Catholic businesses creating and selling great products online. Some of these were just individuals selling rosaries; others were running their own little website selling t-shirts, and there were artists of every sort. It was inspiring and beautiful and reflective of the great diversity and beauty in the Church. Sadly, they were also hard to find. I figured that bringing them together under one roof would be a way to increase their collective exposure, helping customers and vendors.”

Some of these Catholic items were available on Etsy, but Rummelhoff wanted a company specifically dedicated to Catholic values. “Functionally, both platforms are multi-vendor marketplaces,” he explained. “Peter’s Square vendors must be Catholic, though their products aren’t necessarily religious.”

One vendor who sells on Peter’s Square, Nick Jobe, shared with Aleteia how even well-intentioned Catholic items can be used for less than great intentions: “One of my *favorite* pieces is the Memento Mori skull rosary,” Jobe said. (“Memento Mori” translates from the Latin to “Remember that you shall die.”  This rosary combines the traditional rosary with the Rule of St. Benedict.)

“The idea of Memento Mori features prominently in some of my favorite artwork — the skull of Adam at the foot of Christ’s Cross, for example [read about that here] — and it’s important in my own spirituality as a Knight of Columbus,” Jobe said. “I’ve also made this rosary for a few people who sincerely appreciate the devotion and they seem to enjoy the rosary immensely.

“One day, though, I got a notification that someone had added this rosary to their ‘favorites’ on Etsy. Out of curiosity about my audience, I checked this person’s public favorites, and saw my skull rosary along with a horde of ‘Hecate’s rosary’ and all kinds of other pretty disturbing occult/witchcraft kind of products. I immediately pulled that particular rosary from Etsy, and now I only have it listed there a few times a year — the month of the Holy Souls, for example. But it’s always available on Peter’s Square, because I know I can have much more confidence in the kind of audience that Peter’s Square attracts, and I know that my rosaries more than likely will not end up being purchased for nefarious purposes.”

Founder Rummelhoff explained the website’s name to Regina: “Speaking as a convert, the central issue for life in the Church is authority. The final reason for divisions is a denial of authority. So, fidelity to authority is huge for me. […] When I was trying to come up with the right name for a Catholic marketplace, I racked my brain for a week before I realized that the name was obvious. A square — as in a plaza or piazza — isn’t always a marketplace, but it can be.  And there is already a St. Peter’s Square — in Rome! — that is unquestionably Catholic. So, Peter’s Square seemed a natural fit.”

Solidarity is another reason Rummelhoff saw a need for a marketplace for Catholic businesses.”More than any other reason, I believe that supporting Catholic businesses, whether they are incorporated or just an individual mom working out of her house, is an essential part of living out the principle of solidarity.”

Shop the marketplace at www.PetersSquare.com