John Paul II’s parents: He couldn’t have wished for a better mom and dad 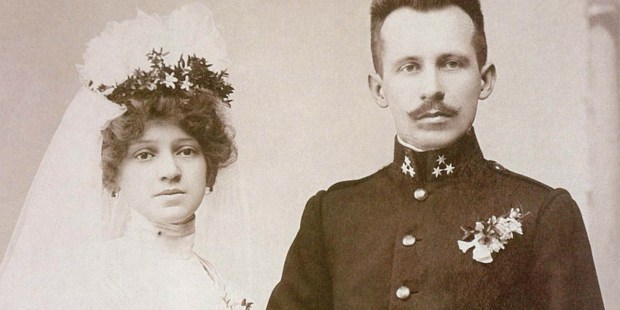 As we mark his May 18 birthday, a look at the couple who gave the world a saint.

“Could you open the window, please? I want Lolek to hear a song in praise of the Holy Virgin,” said Karol Wojtyła’s mother shortly after giving birth to her son. His father would later offer him the “first home seminary.” These were the parents of the future pope and saint.

An evening devotion dedicated to Our Lady was taking place on May 18, 1920, in the Wadowice Church of the Presentation of the Holy Virgin Mary, when 36-year-old Emilia Wojtyła delivered her third child; she called her newly-born son Karol (Lolek, for short).

After the successful delivery, the weary mother asked the midwife in a weak voice: “Could you open the window, please? I want Lolek to hear a song in praise of the Holy Virgin.” These words give you a picture of the family into which was born the man who became Pope John Paul II.

It was a devoutly Christian family, whose members began their day with Holy Mass, prayed before every meal, and in the evening listened to the father read out passages from Scripture.

Naturally, when Karol was little, his mother had the biggest influence on him. Though she was with him on earth for a short time, he no doubt inherited her compassion for her neighbors, her optimism and joy, and her knack for telling jokes. As the pope himself admitted in the book Gift and Mystery, his mother Emilia’s contribution to his religious education “was no doubt profound.”

It was the future pope’s mother who taught him his first prayers and the sign of the cross. Her religious impact on Lolek can be seen in one significant event, namely Karol’s reaction to other peoples’ condolences after the death of his brother Edmund. Although the boys were very close to each other, young Wojtyła would react to his brother’s death with the following words: “This was what God has willed.” Here he must have reiterated the words of his mother, who was once heard saying to her neighbor that we should comply with God’s will.

Karol’s mother’s influence on the young boy would decrease with time due to Mrs. Wojtyła’s intensifying illness. Both the household chores and the upbringing of the youngest child was gradually taken over by her husband, Karol Wojtyła, Sr.

After his wife’s death, it was he who dedicated himself wholeheartedly to the care of his 9-year-old Lolek. In order to have more time for the boy, he retired early and never remarried.

Such decisions of the elder Wojtyła made both Karols virtually inseparable. After school or on Sundays or religious holidays, they would stroll along the streets of Wadowice, climb the nearby mountains, admire the landscapes, and talk.

No wonder years later the pope would recall as follows: “The years of my childhood and youth are primarily connected with the figure of my father.”

Referring to his father, John Paul II added: “I could watch him closely and saw how much he demanded of himself … This was extremely important at a time which means so much for an adolescent boy. Father, who was very demanding of himself, in a sense did not need to demand of his son. Looking at him, I learned that people should be demanding toward themselves and commit themselves to fulfilling their obligations.”

Wojtyła the elder’s conscientiousness and sense of duty, taken over by his son, would not prevent Karol Wojtyła, Sr. from being perceived as a “man of high culture, angelic good-naturedness and patience.” He was also a patriot, as in 1915 he enrolled with the Polish Legions, continuing military service in a free Poland.

He instilled his own patriotism in his son, teaching him patriotic songs and reading to him excerpts of Henryk Sienkiewicz’s trilogy. The pope’s numerous statements made during his pilgrimages to his fatherland are proof that his father’s efforts did not go to waste.

Interestingly, young Karol’s father was a paragon of a life of continuous prayer; John Paul II called his example “the first home seminary.”

From today’s perspective, one might say that the future pope’s parents’ educational efforts were successful. This success was due to their consistent life of prayer and moral integrity as well as features such as optimism and self-discipline.

Above all, however, the pope’s parents excelled at the loving devotion to their child and this is precisely where we should emulate them.

This article is translated from Aleteia’s Polish edition.