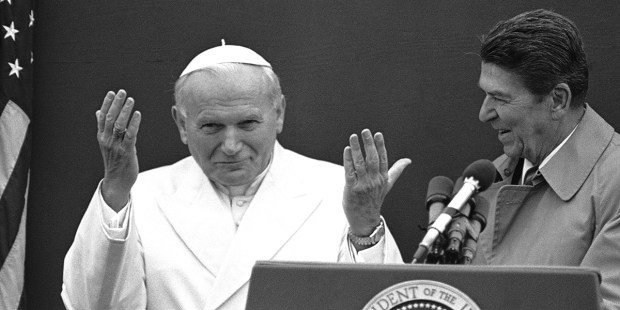 George W. Bush holds the record for the most meetings with Roman pontiffs.

On May 24, 2017, US President Donald Trump will be received by Pope Francis in a private audience at the Vatican. During the 20th century, relations between the United States and the Holy See were closely monitored. Among all American presidents, it is George W. Bush who holds the record of the most meetings with Roman pontiffs.

The first head of state of the US to meet a Supreme Pontiff was Woodrow Wilson. In the aftermath of the First World War, on January 4, 1919, Wilson went to the Vatican to defend the idea of ​​the League of Nations. Finally, neither the Holy See nor the United States ended up being members of the United Nations’ predecessor. Benedict XV was initially suspicious that this idea could end up becoming both socialist and Masonic, while the United States ultimately opted for an isolationist stance.

The second meeting took place more than 30 years later, on December 6, 1959, again within the Vatican walls, this time between Dwight Eisenhower and John XXIII. From that date, the successive US presidents all asked to be received by the pontiff on their first presidential trips to Italy.

JFK, the only Catholic president

On March 11, 1962, a rather special meeting took place in Rome: John XXIII met, not the President of the United States, but the First Lady, Jacqueline Kennedy. On her way to India and Pakistan she decided to make a stopover to greet the Bishop of Rome. On her knees, the First Lady asked for the Apostolic Blessing:

The next year, on July 2, 1963, Paul VI met the only Catholic president in American history: John F. Kennedy. Kennedy arrived at the court of St. Damasus, in the Apostolic Palace, on board a Lincoln convertible:

Paul VI was also the first pope to step on American soil. He spoke (in French, the diplomatic language) in front of the UN in New York on October 4, 1965, and then met with President Lyndon Johnson.

Jonhson and his successors, Richard Nixon and Gerald Ford, were in turn welcomed to the Apostolic Palace by the very same Paul VI.

On October 6, 1979, under the presidency of Jimmy Carter, the White House welcomed the head of the Catholic Church, John Paul II, for the first time. In return, Jimmy Carter made the trip to the Vatican the following year.

The Polish pope met with four other US presidents: Ronald Reagan (4 times), George H. Bush (2 times), Bill Clinton (4 times) and George W. Bush (3 times). These meetings took place seven times in the Vatican, five times in the United States, and once at the pontifical residence of Castel Gandolfo, south of Rome.

But George W. Bush was received two more times in the Vatican, by Pope Benedict XVI. He is thus the president who had the most meetings with Peter’s successor, with a grand total of five times. In order to express his great esteem for Benedict XVI, he broke with a tradition that had always been respected, by welcoming the pontiff as he descended from the plane during his trip in April 2008. He also had another surprise ready for the pontiff: during the pope’s visit to the White House, the president presented him a cake for his 81st birthday!

While the relationships between George W. Bush and the Holy See are often seen exclusively through the prism of their deep disagreement over the war in Iraq, the 43rd president of the United States always tried to show the importance he granted the head of the Catholic Church. Thus, in 2004, one year after the war in Iraq began, Bush went to Rome to hand over to John Paul II the highest civilian honor of the United States: the Presidential Medal of Freedom. Except for John XXIII, who received it posthumously, no other pontiff has received this honor.

George W. Bush’s successor, Barack Obama, visited the Vatican twice: once under the pontificate of Benedict XVI, and once under that of Pope Francis. Until Donald Trump’s visit on May 24, the last encounter between the two states’ leaders took place on September 23, 2015, at the White House, between Barack Obama and the current pope.