Struggling to advertise your business? Pray to St Bernadine of Siena 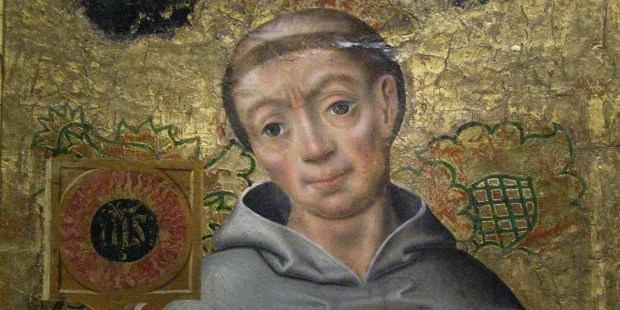 He knew that to relay an important message, one has to use various forms of media, and use them effectively.

Called the “Apostle of Italy,” Saint Bernadine of Siena was known as one of the greatest preachers of all time. Thousands of people would flock to the places where he preached and his words were so moving that people immediately repented from their wrongdoing.

Among his own passions was a devotion to the Holy Name of Jesus. According to the Catholic Encyclopedia, “Everywhere Bernardine persuaded the cities to take down the arms of their warring factions from the church and palace walls and to inscribe there, instead, the initials I.H.S. … At Bologna Bernardine induced a card-painter, who had been ruined by his sermons against gambling, to make a living by designing these tablets, and such was the desire to possess them that the man soon realized a small fortune.”

Over the centuries there have been numerous paintings that depict Saint Bernadine holding up these cards, preaching to the people about the Holy Name of Jesus.

On account of the effectiveness of his preaching and his effective use of visual aids to convince the multitudes, Saint Bernadine is now known as the patron saint of advertisers.

So, if you are struggling with advertising your own business or organization, pray to Saint Bernadine of Siena, who knew that in order to relay an important message, one has to use various forms of media, and use them effectively.

O God, who gave the priest Saint Bernardine of Siena a great love for the holy Name of Jesus, grant through his merits and prayers, that we may ever be set aflame with the spirit of your love. Through our Lord Jesus Christ, your Son, who lives and reigns with you in the unity of the Holy Spirit, one God, for ever and ever.

Saint Bernadine of Siena, pray for us!