Why do Christians use the fish symbol? 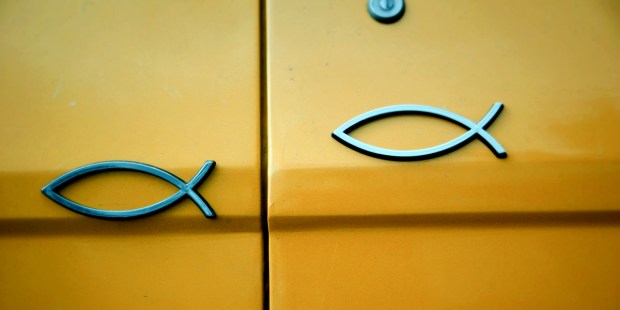 Bumper stickers weren’t the first place where the Ichthys was used.

Fish symbols on car bumpers are common these days. Sometimes the outline of the fish contains a cross within it and is commonly known to indicate someone’s Christian faith. While it may seem like a recent invention, the symbol can be traced back all the way to the beginning of Christianity.

The “Jesus fish” as it is more commonly known today, was first used by Christians in the 2nd century. In Greek it is known as the Ichthys, the word that simply means “fish.” But the Greek letters — ΙΧΘΥΣ — can also be an acronym, as they are the initials of the words in the Greek phrase that translates “Jesus Christ, Son of God, Savior.”

Fish were a common part of Mediterranean life and religion, so for Christians under persecution, the Ichthys became a covert sign to identify their beliefs. The fish also has deep roots in the New Testament. Jesus called fishermen to be his apostles and explained how he would make them “fishers of men.”

Fish also symbolically became tied to the early Christian celebration of the Eucharist. Jesus’ miracle of multiplying the loaves and fish was seen as a prefigurement of the Eucharistic bread at Mass.

The Ichthys was a common symbol in the Christian catacombs and is still used by many Christians today.