Who’s who in Raphael’s School of Athens? 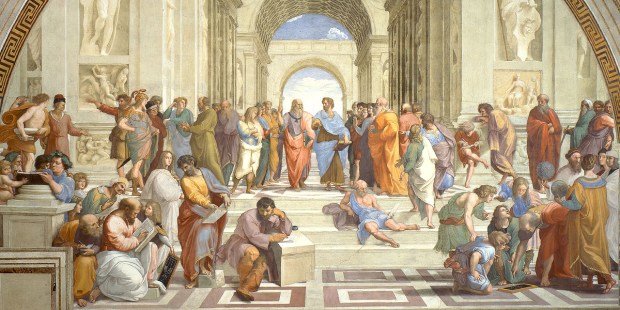 Right, those are Plato and Aristotle, but what about everyone else?

At the center of the image, the gestures of Plato and Aristotle seem to reveal what they are arguing about: “ideas” versus “forms,” according to a widely shared interpretation of their respective philosophical systems. Around them, flanked by the figures of Athena and Apollo, are some of the most relevant philosophers, scientists and mathematicians of classical antiquity (and maybe, according to some, some medieval and Renaissance characters as well) gathered together, yet properly placed in different spaces in order to give the composition the rhythm and balance that characterizes it. This is Rafael Sanzio’s “School of Athens,” commissioned by Pope Julius II to decorate the Stanza della Segnatura, which is a library nowadays.

But the fact that the image is well known by the many does not mean that we are able to identify who is who in it, right? That is why we wanted to share, along with the video above, professor’s Vassiliki Gratziou’s slides on this post, so we could recognize each one of the characters Raphael included in his masterpiece. To access his slideshow, just click here.