The Madonna who consoled those condemned to death 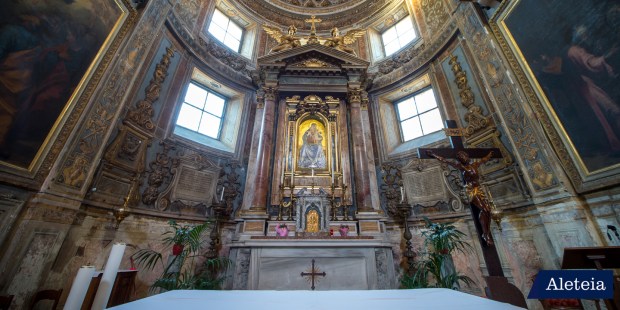 Today’s stop on our May tour brings us to the image where Our Lady saved an innocent man from the gallows.

Starting in the days of ancient Rome, the Tarpeian Rock was a place of suffering. Until the mid-16th century, it was the site where death sentences were carried out. In 1385, when the nobleman Giordanello degli Alberini was condemned to the scaffold, he set aside two florins (gold coins) for an image of the Madonna to be painted right at the foot of the cliff, specifying that the painting be located “ante furcas et locum iustitiae,” that is to say, where the executions took place, in front of the gallows. The idea was that the prisoners, before being executed, seeing that image, would pray and receive consolation in the last moments of their lives. His last wish was carried out by his son, and the image was painted on a wall near the little church of Saint Mary of Graces.

A remarkable event in 1470 called attention to this image. When an innocent man who had been condemned to death passed in front of the Madonna as he arrived to the place where he was to be hanged, he prayed to her, asking that his innocence be recognized. The mother of the condemned also prayed before this image, and as she wept, she heard a voice: “Go, you have been consoled.” Shortly afterwards, her son came to her, telling how a most beautiful Woman had saved him from the gallows. The news spread quickly, and the people came to venerate the image, which from then on was known as the “Madonna of Consolation.”

This is the origin of the name of the church that was built at the site in 1470. The image was moved into the church, which was very soon (and repeatedly) enlarged until it reached its current dimensions at the end of the 19th century. The Madonna of Consolation is found in the apse: the Virgin is seated on a step, wrapped in a blue mantle. She holds the Child Jesus, who is standing on her knees and giving a blessing. The image is attributed to Antoniazzo Romano, who surely retouched the original image on the external wall, but to whom many attribute full credit for this painting. In the chapels next to the apse are reproductions of two other miraculous images: the icon of Saint Mary of Graces and the image of Saint Mary in Portico.

Behind the church’s apse, on the outside of the building, there is a small shrine of the “Madonna of Graces,” dating back to 1658. It is called “Comforter of the Afflicted,” and was placed there in recognition of the city’s liberation from the plague, as is read in the epigraph: “Chr(ist)o Redemptori ac sanctissimae Eius genitrici Mariae urbe a pestilentia liberata gloria sempiterna” (“Eternal glory be to Christ the Redeemer and His most holy Mother for the liberation of the city from the plague”). The painting depicts the Madonna and Child. On the occasion of the 1787 restoration, another inscription was added, directed to passersby: “O passerby, you who stop here with bowed head: Here is the font of graces, this is the Mother of God; look upon her, weep, and pray, because She never denies graces to those who are devoted to her.”