When will Jesus come again? 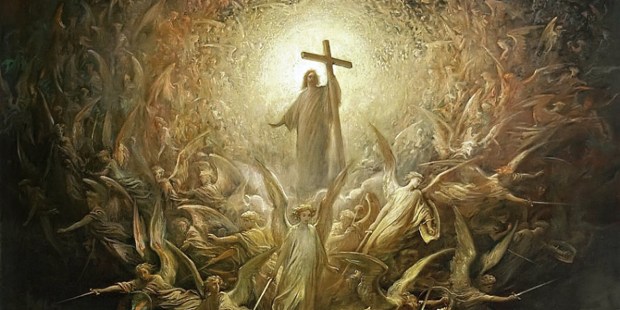 The Church is very clear about Jesus’ Second Coming and how we should prepare for it.

As Catholics, we firmly believe in the Second Coming of Jesus and profess it each Sunday during the Nicene Creed:

I believe in one Lord Jesus Christ … He ascended into heaven and is seated at the right hand of the Father. He will come again in glory to judge the living and the dead and his kingdom will have no end.

It is a belief expressed simply, but one that can often provoke controversy and confusion. For many it is easy to get drawn in by the ever changing theories presented by various individuals and groups (Christian and otherwise) who claim to know the exact time and day when Jesus will return.

What does the Church teach about Jesus’ Second Coming? When will he come again?

The Catechism presents an entire section on this topic and summarizes the Church’s official teaching. It begins by explaining, “Since the Ascension God’s plan has entered into its fulfillment. We are already at ‘the last hour’… According to the Lord, the present time is the time of the Spirit and of witness, but also a time still marked by ‘distress’ and the trial of evil which does not spare the Church and ushers in the struggles of the last days. It is a time of waiting and watching.” (CCC 670, 672).

The apostles knew this truth well and firmly believed that Jesus would come again without delay, possibly within their own lifetime. The Catechism affirms this teaching of Christ’s imminent return, explaining, “Since the Ascension Christ’s coming in glory has been imminent … This eschatological coming could be accomplished at any moment, even if both it and the final trial that will precede it are ‘delayed'” (CCC 673).

Jesus will come again in glory and as Catholics we believe that he could come any day. This is why Jesus was clear to his disciples that they must be prepared, always ready for when he comes again.

But of that day or that hour no one knows, not even the angels in heaven, nor the Son, but only the Father. Take heed, watch and pray; for you do not know when the time will come. It is like a man going on a journey, when he leaves home and puts his servants in charge, each with his work, and commands the doorkeeper to be on the watch. Watch therefore—for you do not know when the master of the house will come, in the evening, or at midnight, or at cockcrow, or in the morning— lest he come suddenly and find you asleep. And what I say to you I say to all: Watch. (Mark 13:32-36)

Read more:
Apocalypse Prep: 7 Things to Do Before the World Ends

Additionally, Scripture notes that before Jesus’ coming there is to be a final “trial” that the Church will undergo and a further persecution of believers.

Considering that Christians have always been fiercely persecuted since the days of Jesus, it is difficult to discern when this last tribulation will occur (or if it is already occurring).

The Catechism explains, “Before Christ’s second coming the Church must pass through a final trial that will shake the faith of many believers. The persecution that accompanies her pilgrimage on earth will unveil the ‘mystery of iniquity’ in the form of a religious deception offering men an apparent solution to their problems at the price of apostasy from the truth.” It is believed that the perpetrator of this mass deception, biblically called the “Antichrist,” will be defeated and Christ will soon after come in glory.

Saint Thomas Aquinas adds that, “although men be terrified by the signs appearing about the judgment day, yet before those signs begin to appear the wicked will think themselves to be in peace and security, after the death of Antichrist and before the coming of Christ, seeing that the world is not at once destroyed, as they thought hitherto.”

Nevertheless, as Catholics we are asked to simply prepare our hearts every day, believing that today could be our last. It could be our own personal “judgment day,” when we meet Jesus at the end of our lives, or it could be the Judgment Day, when Christ comes again in glory.

Whatever the case, we must be on guard and not follow any prophecies or predictions, having peace in the fact that if we live according to God’s plan, the Last Day will be one of rejoicing. This is why Christians have always looked forward to Jesus’ Second Coming, knowing that the end of the world is a good thing, when our tears will be wiped away and our toil on this earth finally ended.

Read more:
To hell and back: Journeying with Jesus from death to life