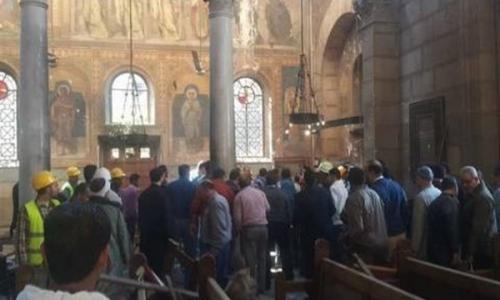 Pilgrims were headed to monastery

UPDATE: Media are reporting that the death toll has risen to 28.

At least 23 people have been killed and 25 wounded after gunmen opened fire on vehicles carrying Coptic Christians to a pilgrimage site in central Egypt, the BBC reported.

Witnesses said that 8-10 masked men wearing military uniforms stopped a bus and two other vehicles as they drove along a road leading to the monastery of St. Samuel the Confessor in Minya province, about 140 miles south of Cairo. They then opened fire.

The New York Times reported that a Christian official in Minya said the attackers opened fire on a pickup truck carrying workmen and a bus carrying worshipers as they traveled in convoy to the monastery.

“We are having a very hard time reaching the monastery because it is in the desert. It’s very confusing. But we know that children were killed,” said the official, Ibram Samir.

According to Ahram Online, the ages of the victims ranged from children to over 60, the bishop of El-Minya told Egyptian private-owned TV Channel DMC.

There was no immediate claim of responsibility, but the Islamic State has claimed responsibility for previous attacks against Egypt’s Christians, the Washington Post said. Those attacks have been during liturgies and some seem to have targeted women and children, as in the case of the bombing of St. Peter’s Coptic Orthodox Church in Cairo last December. ISIS also attacked a church in Alexandria and a church in Tanta on Palm Sunday, April 9. A small Christian community in northern Sinai fled the town of El Arish after a series of gun attacks on homes and businesses.

Pope Francis addressed the crisis when he made a two-day visit to Egypt last month. He paid tribute to the victims of the December bombing and told Christians: “The only fanaticism believers can have is that of charity.”

The latest attack took place as Muslims around the world prepared to begin a month of daytime fasting called Ramadan. It is a period that has seen a spike in terrorist attacks in recent years, and according to the Telegraph, ISIS has called on its followers to mark the month by rising up in an “all-out war” on “infidels” in the West.

That call for attacks comes as Iraqi forces continue to retake the city of Mosul from ISIS, and Western forces prepare to do the same to the caliphate’s de facto capital in Syria, Raqqa.

“The state is doing its best, but we need more efforts,” Minya’s Coptic Bishop Makarios told the Washington Post. Security forces are “always present and on guard after the attack takes place, and keep their security measures tightened for a short while after. . . . What we need is real effort exerted to ensure this is not repeated, not just solidarity and compassion.”