Dinosaur relic allows us to look nodosaur in the face 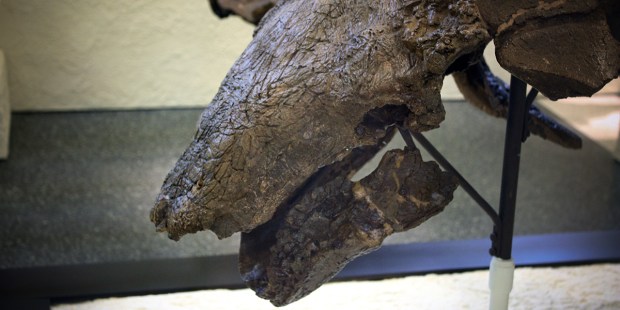 Nature is still revealing itself to us.

Canadian miner Shawn Funk made an interesting discovery while digging deep in Millennium Mine, in Alberta, Canada. The Washington Post reports that while using a mechanical backhoe, Shawn noticed a much harder section of rock. Upon examination it was discovered to be an 18-ft, nearly 3,000-lb fossil of a nodosoaur.

The exceptional preservation of this fossil makes it one of the rarest ever found. After approximately 110 million years it still retains the majority of its spines and all of its facial details. It is much more common to find partial skeletons or teeth due to the high-pressure process of fossilization.

The Washington Post explains how this magnificent preservation may have occurred:

Researchers believe it was on a river’s edge, perhaps having a drink of water, when a flood swept it downriver.

Eventually, the land creature floated out to the sea — which the mine where it was found once was — and sank to the bottom.

There, minerals quickly “infiltrated the skin and armor and cradled its back, ensuring that the dead nodosaur would keep its true-to-life form as eons’ worth of rock piled atop it.”

The fossil was taken to the Royal Tyrrell Museum of Paleontology, where it will be studied by researchers and eventually will be put on display.