Parents, get off the sidelines and let the coaches coach 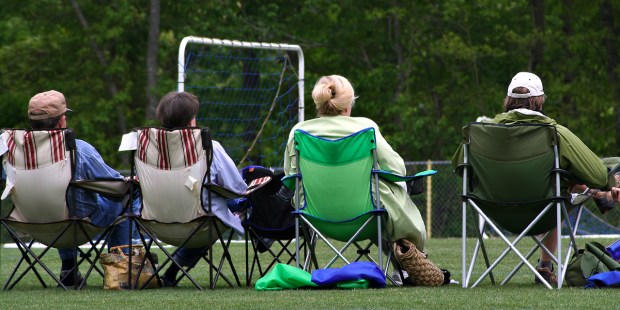 All our helpful advice and encouragement doesn’t help, and sometimes it hurts.

A few weekends ago, I  watched my daughter get kicked in the face in a sparring match. Her eyes filled up with tears and she started casting desperate looks toward her coach and me. She was scared, hurt, and wanted to get out of the ring, but the medics checked and cleared her. So her coach sent her back in with encouragement and instruction. “Don’t give up! Hit her back! You’re okay, remember your axe kick!”

Read more:
4 Catholic coaches who led their teams to greatness

She didn’t think she was okay. She kept backing up, trying to get away from the fight. It wasn’t just any sparring match — it was the AAU taekwondo regional qualifying tournament. She didn’t have to win to qualify, but she couldn’t forfeit. She had to finish the fight.

I knew she was okay, but I was worried she’d be wrecked if she didn’t qualify. I was frantic to help, so I started shouting too. Echoing her coach, mostly, but throwing in a few tips of my own.

She finally got a half-point penalty warning for refusing to fight. The next one would end the match in a forfeit. So I shouted, “FIGHT, SIENNA! FIGHT!”

She did. She fought back, threw her axe kick, and ended up coming from behind and winning the match by one point in overtime.

She still came off the floor crying, though.

I thought about Sienna’s tears when I read these words in an article by Mark Maguire in CoachUp Nation:

During the 2014 season, I asked my then 11-year-old son, “What do all the children in the dugout think when their parents urge them on with ‘instructions’ and ‘encouragement’ as they are playing the game?” He said bluntly: “They don’t like it.”

I further pressed him, “What about when I call out some last second reminders just before you bat, you know, the things we’ve talked about during the week and to help you remember what to do?” Again, he didn’t mince his words and said, “Dad, it doesn’t help.”

His son was so decisive in his answer, and so sure that all his friends felt the same way. What if Sienna felt that way, too? Was I really thinking about her at all when I was yelling from the sidelines?

I thought I was trying to help her, but maybe I wasn’t. Maybe I was just trying to make myself feel better by pretending that I had some control or influence over her performance. Maybe I was, in fact, distracting her from the only voice she really should have been listening to — her coach’s.

Read more:
When Parenting Is Illegal

I asked her yesterday while we cleaned the kitchen what she thought when I called out things during a fight. She was wiping the counter, and she shrugged a little and kept wiping while she answered. “Mostly I don’t really hear it. I only hear the things Mr. Jason says half the time, too — it’s too hard to listen while I’m sparring.” She paused for a minute, then added, “Except when you yelled for me to fight. I heard that, and that helped.”

I felt pleased for a second, and relieved. “Really?” I responded. “Why did that help?” She stopped wiping the counter and put the sponge down, then turned to look at me.

“Because I didn’t want to let you down.”

That hit me harder than a foot to the face. Sienna loves taekwondo and sparring, but sparring is hard. It’s a combat sport, which is a lot of pressure for a kid. She doubles that pressure by hanging her self-worth on the outcome of every match.

I want her to do it because she loves it, and I want her to learn to lose without letting herself get beaten. Someone will always be better, but not everyone will be. I want her to keep sparring long enough to learn that all that pressure is mostly in her own head — it’s a fight, but it’s a sport.

Instead, I’ve been adding to that pressure by hanging my own emotions onto her fights. All my “helpful” advice about specifics has just been undermining the larger lessons that I want her to learn: resilience, courage, and confidence in herself.

From now on, I’m benching myself during her fights. If I film them, I’ll do it from the bleachers … out of her line of sight and range of hearing. I’ll leave the coaching up to her coach, and stick to what I do best — parenting.