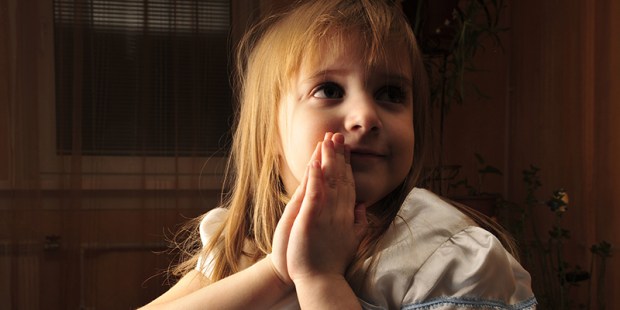 A child’s natural impulse sheds new light on a treasured Bible story and the Catholic faith.

[Editor’s note: In response to Sr. Theresa Aletheia Noble‘s lovely reflection on One key reason why Catholics honor Mary, a reader offered us this insightful reflection. Jesus did tell us to learn from the little children! Articles like this remind us why:]

One night on a whim, I decided to introduce my 5-year-old daughter to the story of the Prodigal Son. During our daily bedtime ritual, I thought, “Maybe tonight I’ll try something different, a story that really inspires me, a story I want to pass on.”

I quickly ran through some Bible passages in my mind, and the Prodigal Son seemed just right.

I did not explicitly introduce the story as religious and I adapted the details so my daughter could relate to it. I told her that the son left with a big chunk of the family’s money and bought all the toys he wanted and stayed up late watching movies. My daughter understood how transgressive that was. The story was a hit. She was able to relate to it very well, and expressed astonishment that the son had chosen to leave his father. “I would never do that!” she assured me.

But there were further lessons as well. When it came to the part about how the son decided to come back to the father, I had to describe how hard this was: a mixture of shame and fear of reprisal. I tried to make these feelings relatable — because I can relate to them and I think we all can. The feelings of the prodigal son are a big reason why we all stay away from God for too long.

My daughter had no problem understanding how reluctant the prodigal son would have been to confront his father after such a flagrant offense. Her response, however, opened my eyes to an aspect of my faith that I often overlook. Trying to find a solution, she paused, searching for an answer.

Then, she wondered aloud, “Did he have a mother?”

It was clear to the mind of a child that it is sometimes easier for us to approach a mother. My daughter instinctively knew that the end result in the story of the prodigal son would be the same: a reunion with the father and the whole family. Going through the mother was my daughter’s natural impulse — not something she needed to be taught.

It just made sense.

That is how a 5-year-old girl reminded her father of the importance of turning to our Heavenly Mother in our time of need.

Read more:
Mary, mystery and the minds of our children