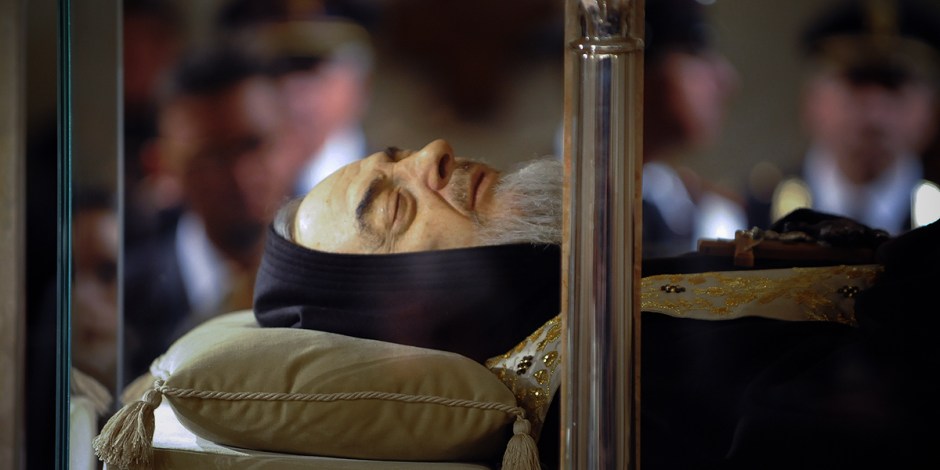 A pilgrim venerates the body of Padre Pio in a part-glass coffin in the crypt of the old Church of St. Mary of Grace at San Giovanni Rotondo in the Apulia region in southern Italy on April 24, 2008. He died on September 23, 1968 at the age of 81.

In his life the saint bore the stigmata (wounds of Christ) and stated “”The pain was so intense that I began to feel as if I were dying on the cross.”

He has been credited with thousands of miraculous healings and intercessions is is considered by many to be the most “prayed to” Saint.

“I have made a pact with the Lord: when my soul has been purified in the flames of purgatory and deemed worthy to be admitted to the presence of God, I will take my place at the gate to paradise, but I shall not enter until I have seen the last of my spiritual children enter.”

“Keep close to the Catholic Church at all times, for the Church alone can give you true peace, since she alone possesses Jesus, the true Prince of Peace, in the Blessed Sacrament.” – Saint Pio of Pietrelcina

Tags:
Padre PioPhoto of the Day
Daily prayer
Aleteia's Top 10
See More
Advertising
Newsletter
Get Aleteia delivered to your inbox. Subscribe here.
Thank you! Your submission has been received!