What do the Alpha and Omega represent in Christian art? 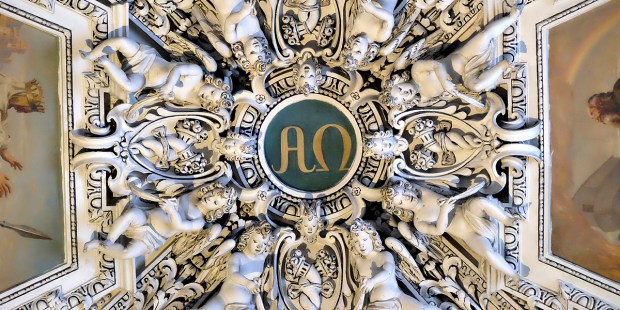 Shutterstock
Alpha and Omega -“I am the Alpha and the Omega,” says the Lord God, “the one who is and who was and who is to come, the almighty.” If you're unfamiliar with Greek letters, you may not realize that the Greek symbols for “Alpha” (α or Α) and “Omega” (ω or Ω) are very prevalent in Christian art.
Share
Print
Philip Kosloski - published on 05/29/17

The Greek letters have a deep and ancient meaning.

It is common in Christian art to find two Greek letters: the alpha (Α) and omega (Ω). These two letters have an ancient history in Christianity and are rooted in the book of Revelation, where God says, “‘I am the Alpha and the Omega,’ says the Lord God, who is and who was and who is to come, the Almighty” (Revelation 1:8).

As a result, from the very beginning of Christianity the first and last letters of the Greek alphabet were used to affirm Jesus Christ’s divinity. The letters were also used by early Christians as a monogram for the name of Jesus and was used to symbolically represent Jesus in art. It started to be used in artistic representations in the 4th century and continues to be a standard feature in churches to this day.

Additionally, the two Greek letters have a spiritual correlation to the ancient Jewish understanding of the attributes of God. According to the Catholic Encyclopedia, “The Hebrew [word] for truth is Emeth. It is composed of three letters: Aleph=Alpha, Mem=My, and Thaw=Theta. The Aleph and the Thaw are the first and last letters of the Hebrew alphabet as the Alpha and Omega are of the Greek. Thus the term Emeth (truth) begins with the first letter of the alphabet and ends with the last.” Ancient Jewish scholars saw this mystically and believed “The Aleph or the first letter of Emeth (truth) denotes that God is the first of all things. There was no one before Him of whom He could have received the fullness of truth. The Thaw, or last letter, in like manner signifies that God is the last of all things. There will be no one after Him to whom He could bequeath it.”

So the next time you see the the alpha (Α) and omega (Ω), think of Jesus, the Truth who can set you free.