“Free Listening”: The art of listening 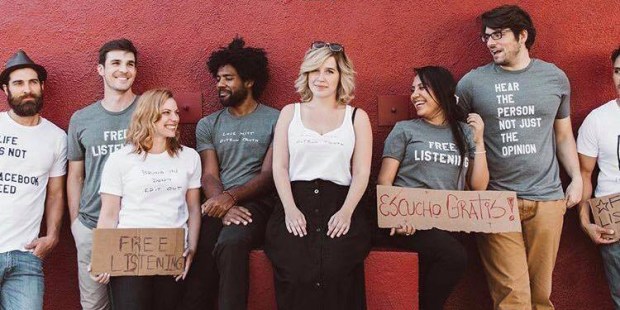 The Free Listening movement is growing in response to a society that “needs to be listened to.”

People are going out onto street corners with signs that say “Free listening,” and they are listening to people who stop to talk. In the United States, they do it under the banner of an organization called Urban Confessional; in Spain, the activity is organized by Senti. This international movement, which transcends political or religious divisions, is out on the streets of cities such as Los Angeles and Barcelona, with the conviction that people need others to listen to them. They dedicate themselves to doing it.

“We all need to talk, but it’s difficult for us to express ourselves in this technological age,” Esther Pallejà and Lucila Teste explain. They are actresses who head up the Free Listening movement in Barcelona, with their project named Senti. “Face-to-face interaction doesn’t happen on the streets anymore; before, while you were waiting for the bus or when you went into a store, it was very likely that you would end up commenting on something with people who were complete strangers,” they say. “Now, when we have to wait, we take out our cell phones,” they add.

Benjamin Mathes, a friend of Esther, had this idea first in the United States. He started this movement by going out to listen to people in Los Angeles. Nowadays, his initiative has gone international, as shown by projects such as that of Lucila and Esther. The world-wide network also carries out some shared activities, such as Free Listening Day, which was celebrated last April 11. “We hold signs and allow people to talk, sing, dance, yell, cry, and share with us,” the Urban Confessional project states in its web presentation.

The importance of listening and expressing yourself

Neither Senti nor Urban Confessional is affiliated with any religion, but “our activities are related to many values,” Esther assures us. Both actresses argue that listening doesn’t only benefit the person who is talking. According to Lucila, “You, as a listener, have to deal with many things, and experience many emotions.” Listening involves tolerance, empathy, and understanding, as well as the joy of sharing. In fact, the main innovation of Senti with regards to the global Free Listening movement is its artistic aspect.

“We believe that whoever practices active listening should express what he or she feels after that experience.” This is why, in the cultural space in Barcelona called La Cháchara, directed by Lucila, they provide the participants with all kinds of materials for giving an outlet to their emotions. “This part is related to performance, which helps people get more out of the experience.”

Furthermore, listeners feel the need to share the stories that people have told them. In fact, several podcasts have been made based on Free Listening, in which some of the stories that were heard are recounted. Of course, this is done without giving first or last names. “Confidentiality is one of our conditions. Many times, we don’t even know the name of the person we are talking to,” Lucila and Esther point out.

How should we listen?

Dedicating yourself to active listening requires commitment and adherence to certain guidelines in order to avoid practices that could put in danger either the person who is talking or the one who is listening. To this end, Urban Confessional has published a practical guide, which lists all of the “keys to listening”:

The guide also includes an entire section on safety recommendations for listeners, such as neither accepting nor giving money to anyone. Every conversation has a specific duration. In Barcelona, the people who most often approach the listeners are elderly. However, listeners can be all kinds of people, of all ages.

Accordingly, Lucila and Esther extend an invitation to anyone who wants to be a listener. “It’s an enriching experience. You discover many connections with other people, you feel very present for them, and you make the other person feel like their presence is important to someone.”

In fact, one of the experiences that most stands out for Senti members is the day when they did free listening at a jail. “Their stories put you in a very delicate place, and you have to get out of yourself and not judge. The human contact was very intense on that occasion.” The experience made these two young actresses from Barcelona see that their initiative could be useful in many other areas, and they are working to make it grow. Their goal is to ensure that people never cease to listen to each other.