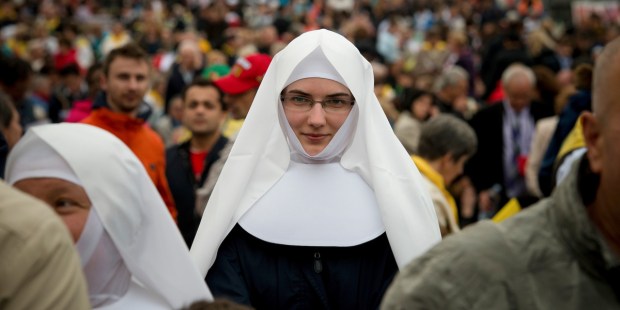 Yes, when you carry on about nuns’ habits, or what defines modesty, you really are objectifying women.

When I first started exploring religious life I was only slightly aware of the raging inferno of contention within Catholic circles regarding the wearing of the religious habit. In my blissful ignorance, I visited all kinds of religious orders, habited and non-habited, and almost without exception, met women who were in love with God, his Church, and his people.

Eventually, after visiting many convents, I decided that I really would prefer to join an order that wore a religious habit and veil. As a former atheist, I want to spread the Gospel, and the habit is an evangelizing tool in a world that is increasingly secular. Without the habit, in the United States at least, no one would know that I am a religious sister. My veil and habit are a signal and a sign of something that lies beyond this world. The habit is a powerful reminder of God in a world that has forgotten him.

There are all kinds of arguments in favor of the habit but this, for me, is the most important.

I think a lot of Catholics feel similarly. Many people express relief to see me as a young religious in habit. I can’t totally understand the background of people’s relief. I was not alive in the 60s when chaos engulfed the Church and many religious began to discard the habit. But I definitely do understand the preference for the habit. I prefer the habit, too.

So, as you can see, I have strong feelings about the importance of the habit. But I have equally strong feelings about the inappropriate and unchristian mocking, judging, or criticizing of women religious who do not wear the habit. I cannot tell you how many times I have been pulled aside only to hear, “I am so glad you wear the habit Sister,” and then in a low whisper, “and not those ugly polyester pantsuits.”

Even worse, some people say to me, “I am so glad to see a real nun in a habit!” A non-habited religious sister once told me that she went into a store when another habited sister had, coincidentally, just left. The store owner, knowing the sister without a habit was a religious said, “A real nun was just here!” She replied, “And what am I, a knock-off?” The store owner’s attitude about the habit completely missed the essence of religious life. Our vows and how we live them make us religious, not our clothes.

Read more:
Habited or Unhabited, Who Are the “Real” Nuns?

Just after I entered the convent, a group of us were speaking to the pastor of a nearby church. Some older women religious (without habit) circled around us; they were excited to welcome the new postulants. The pastor, who many times just in the first few days, had made it clear to us how happy he was that we wore the habit, looked at the non-habited sisters disdainfully and ignored their presence. When one of the sisters spoke, the pastor acted as if he had not heard her. The exclusion was apparent. I was embarrassed and appalled.

This was the first time I felt the pain of women religious who are treated differently simply because they do not wear the habit.

Another time after recently entering, a young priest spoke to me and another young postulant disparagingly, at length, about our order’s habits (because they are slightly shorter and a more modern style). To his surprise, I told him that I actually happened to agree with him. I would prefer a more traditional habit. But then I asked, “What do you expect me to do about it? Join another order? Leave the charism God called me to because this habit is not to my liking? Look for orders based solely on the criteria of the look of their habit?”

Strong feelings about the habit are rooted in some good sentiments: Love for the Church, evangelization, beauty, and tradition, among other things. But as with everything in life, there is often a disturbing, ugly underlining to the obsession with the habit question.

Read more:
A Habit of Visual Witness in a Noisy, Distracted World

A similar dynamic and topic of conversation that relates to all women comes up every time we approach swimsuit season: modesty. Of course, modesty is an important Christian value and when women clothe their bodies modestly, they are reminding others that their body is not an object. But, interestingly, women are treated like objects both when they dress immodestly and also when how they dress becomes a fixation. When women are told, explicitly or implicitly, that they are worthless, unchaste, or a slut if they don’t dress a certain way they are also being objectified. When women are told what to wear in an obsessive way that emphasizes exteriors over the living of virtue, it becomes more about control and less about virtue.

In short, sentiments about what women should wear, while they can be fueled by sensible and even Christian ideas, can also be mixed up with sexism and overstepping boundaries.

So, what is the solution?

Should we abandon discussing the importance of modesty and the religious habit? I don’t think so.

But we can take each woman as she is and not judge entire swathes of women based on what they do or do not wear.

We can hold opinions and preferences about the importance of something without judging or assuming we know absolutely and without a doubt what is best for a person.

Finally, we can talk about the habit and the modesty question in a way that does not objectify and respects the dignity, free will, and complexity of each woman’s situation.