The Pope’s man in Cannes: Angels should be the patrons of film 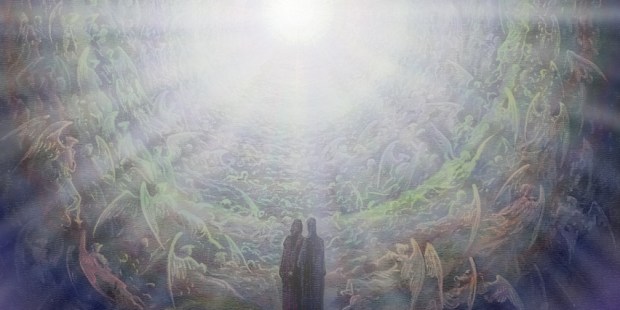 CANNES — Actors, directors and producers, whether Catholic or belonging to a Christian denomination, can feel somewhat alone these days in their work and vocation as film artists. For unlike other professions, film-makers do not have a patron saint to whom they can entrust their projects, dreams, and suffering.

That is why Pope Francis’ point man for communications at the Vatican, who last week attended the Cannes Film Festival, has proposed something unexpected: making the angels the patrons of film and cinema.

Monsignor Dario Viganò, Prefect of the Holy See’s Secretariat for Communications, observed that while other areas of communication have their own patron saint — journalists have St. Francis of Sales; the world of advertising has St. Bernardino of Siena; television has St. Clare — cinema does not.

Msgr. Viganò, who was a university professor of film and cinema, proposed that the angels be the holy patrons of cinema; not angels as we sometimes imagine them to be, but those spirits “that are motion and light, just like the cinema, and that bring to God’s ears the dreams, fears, failures and prayers of men.”

“If I think about the angels,” Msgr. Viganò told attendees at Cannes, “I do not look to those too often portrayed in traditional devotions, but to the angels of the Bible, to those of Dante or of Rainer Maria Rilke; in short, to the characters portrayed in “Wings of Desire,” referring to the 1987 cult film (Der Himmel über Berlin), directed by Wim Wenders.

When Monsignor Viganò announced his idea at the American pavilion at the Cannes Film Festival, Wim Wenders was with him. The German filmmaker said: “I am in no way responsible for it, because when I wrote that script, I wanted to create outrageously fictional characters.”

“The fact is, as we worked, something different and deeper actually happened,” he explained, saying that the film was the fruit of a process of daily inspiration that surpassed his own as a director, as if the angels themselves had inspired his work.

“My hope is that every individual, and every artist, will experience the same feeling, which in my case did not come from me, but came to me,” he confessed.

The Catholicism of the Catholic Church states the following about angels:

The existence of the spiritual, non-corporeal beings that Sacred Scripture usually calls “angels” is a truth of faith. The witness of Scripture is as clear as the unanimity of Tradition. (CCC, 328)

As purely spiritual creatures angels have intelligence and will: they are personal and immortal creatures, surpassing in perfection all visible creatures, as the splendor of their glory bears witness (CCC, 330).

“Angels are spiritual creatures who glorify God without ceasing and who serve his saving plans for other creatures: “The angels work together for the benefit of us all” (St. Thomas Aquinas, STh I, 114, 3, ad 3). The angels surround Christ their Lord. They serve him especially in the accomplishment of his saving mission to men. The Church venerates the angels who help her on her earthly pilgrimage and protect every human being” (350-352).

Pseudo-Dionysius (On the Celestial Hierarchy) and St. Thomas Aquinas (Summa Theologica) drew on passages from the New Testament, specifically Ephesians 1:21 and Colossians 1:16, to develop a schema of three Hierarchies of angels, with each hierarchy containing three Orders or Choirs: the Seraphim, the Cherubim, Thrones, Dominions, Virtues, Powers, Principalities, Archangels and Angels.

In Canto XXVIII and XXIX of Dante’s Paradiso, the poet sees in three hierarchies the nine choirs of angels, while Beatrice clarifies doubts in the poet’s mind at beholding the site, and reprimands theologians and preachers who substitute their own inventions for the pure word of the Gospel.

Read more about the angels in the Catechism of the Catholic Church here.