Silence and the meaning of the Mass 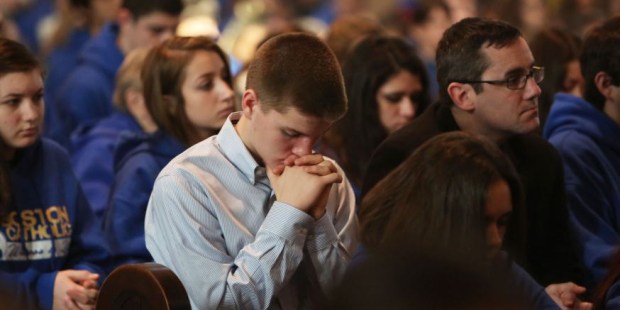 Perhaps we have so well observed the Second Vatican Council’s call to “conscious participation” that we have undervalued the work of silence.

Robert Cardinal Sarah’s recent book The Power of Silence: Against the Dictatorship of Noise explores a number of themes both theological and spiritual, all centering around the unhappy role that noise has come to play in our culture and more specifically in the Church. His observations are most trenchant in regard to the liturgy, which should come as no great surprise, given his role as head of the Vatican Congregation devoted to liturgy and sacraments. As I read the sections of his book dealing with the importance of silence during Mass, I often found myself nodding vigorously.

I came of age in the period immediately following the Second Vatican Council, when an enormous stress was placed, quite legitimately, on the conciliar call for “full, conscious, and active participation” in the Mass. That famous phrase, derived from the ground-breaking work of the theologians of the liturgical movement of the early and mid-20th century, was a clarion call to the laity to assume their rightful role as real actors in the liturgy and not mere spectators. But in its practical application this came too often to imply that the laity must be continually stimulated into action during the Mass: processing, standing, singing, responding, clapping, etc. It was as though the directors and leaders of the liturgy felt they must be constantly grabbing the congregation by the shoulders and shaking them into conscious participation.

Silence, accordingly, tended to be construed as the enemy, for it would lull the people into inattention and boredom. Hardly anyone in the post-conciliar liturgical establishment appreciated that silence could be a sign of heightened, even enraptured, attention on the part of the congregation, a deeply contemplative entry into the mystery of the Mass. And what several decades of this in turn has produced, especially among the young today, is the impression that the Mass is a sort of religiously-themed jamboree, during which our fellowship is celebrated and at which lots and lots of sound is indispensable. I will confess that during many years as a priest, and now as a bishop, I have often wondered whether our hyper-stimulated congregations know exactly what they are participating in. They know that they are active, but active precisely in what?

The Mass is the act by which the Son of God, in union with his mystical body, turns toward the Father in worship. Through our full, conscious, and active participation in this right praise, we become more rightly ordered, more completely configured to Christ and more thoroughly directed toward the Father. We do indeed experience heightened fellowship with one another during the Mass, but this is because we are realizing, not so much our mutual affection, but our common love of a transcendent third, to use Aristotle’s language.

In this regard, one of the most illuminating rubrics under which to read the Mass is that of call and response: Christ the head, through the priest who is acting in Christ’s person, calls out to the members of his mystical body, and they respond, somewhat in the manner of the lovers in the Song of Songs. At the very commencement of the liturgy, the priest (again, operating not in his own name but in persona Christi) says, “The Lord be with you,” and the people respond, “and with your spirit.” The spirit in question here is the power of Christ dwelling in the priest through the sacrament of Holy Orders. This exchange continues throughout the Mass, Head and members conversing with one another and solidifying their communion. Jesus speaks his Word in the Old Testament readings and in the Pauline epistles, and the members of his body sing back to him in the responsorial psalm; Jesus announces himself in the Gospel, and the people chant back, “Praise to you, Lord Jesus Christ;” Jesus breaks open the Word through the preaching of the priest, and the people respond with the Creed, a signal of their faith.

Having prepared the gifts (presented by the people), the priest says, “Pray, brothers and sisters, that my sacrifice and yours may be acceptable to God, the Father almighty.” This line is of great significance, for it signals the moment when Christ and the members of his body are turning toward the Father in order to perform an act of sacrifice and thanksgiving. How beautifully the Preface to the Eucharistic Prayer expresses this dynamic: “Lift up your hearts!” says Christ to his people; they respond, “We lift them up to the Lord,” and then Jesus, through his priest, says, “Let us give thanks to the Lord our God.” What follows is the magnificent Eucharistic Prayer, directed toward the Father and prayed by Head and members together, the latter’s many sacrifices—small and large—subsumed into the former’s definitive sacrifice on the cross. At the conclusion of the liturgy, Christ sends his mystical body, now more perfectly ordered to the Father, back into the world to effect its transformation.

Cardinal Sarah imitates his master Joseph Ratzinger in insisting that silence rightly asserts itself throughout this entire process. The silence of gathering, recollecting, listening, praying, offering, etc. There is plenty of sound in the Mass, but unless silence is cultivated therein as well, we can easily lose sight of what we are doing in this most sublime of prayers.