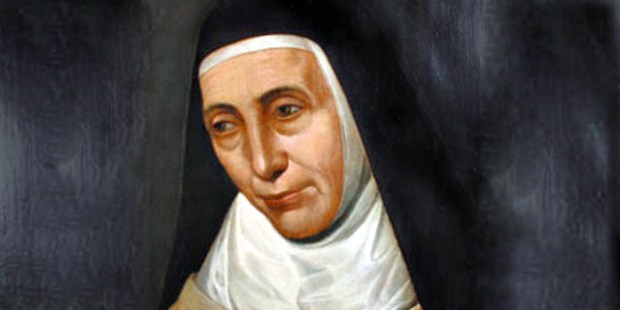 The great doctor of the Church was accompanied by a very humble — and very holy — peasant.

In the 16th century, the Church was in trouble. Plagued from without by the Protestant Reformation and from within by mediocre priests and religious, she needed heroes, the brilliant and eloquent saints of the Catholic Reformation such as Ignatius Loyola and Francis de Sales. She needed the noble, brilliant, outspoken Teresa of Avila.

She also needed the ordinary, uneducated Anne of St. Bartholomew.

The seventh child in a very pious peasant family, Anne (1549-1626) spent her childhood as a shepherdess and was orphaned by age 10. From that point, her siblings began to look to the future of the heartbroken child, discussing how they would arrange a marriage for her. But Anne wanted to be a bride of Christ. Considering her options, she thought that perhaps she could be persuaded to marry a man who was just, very prudent, and very handsome. In the wake of this decision, Jesus himself appeared to her, saying, “I am the one whom you love and whom you must marry.”

From that moment, nothing would persuade Anne to accept another spouse—and the obstacles set before her sometimes seemed insurmountable. Anne’s siblings weren’t thrilled by her desire to be a nun. They were convinced that she wouldn’t persevere in religious life and in leaving would bring shame on the family, so they did their best to introduce her to marriageable men. Anne, for her part, would dress in rags and refuse to speak to men who were interested in her.

When the Lord finally appeared to Anne in a dream to lead her to Carmel, to the nuns of St. Teresa of Avila (herself still alive), she was overjoyed—only to be refused entry because she was too young. After that, her brothers’ resistance increased; they made her work in the fields with the hired men, giving her twice the work of the men in order to break her will. Despite the temptations to sin that plagued her, Anne felt strengthened by the Lord to endure the trials put before her.

But the devil wasn’t content with temptations and one evening Anne came face to face with a demon. Though she called on the Holy Trinity for help and was protected, she was given such a fright that she became extremely ill. As her sickness progressed, her family became concerned and eventually took her to a shrine of St. Bartholomew, where she was healed.

Their opposition then took a different tack; they were happy to let her become a nun, they said, but why so far away? Surely she could enter a nearby convent where she might leave to see her family sometimes. When Anne remained firm in her commitment to follow God’s will to Carmel, one of her brothers became so enraged that he drew his sword to kill her. After their sister held him back, the family realized that their hostility to Anne’s vocation was unnatural (diabolical, Anne says) and finally permitted her to join Teresa of Avila and the other Discalced Carmelites when she was 21.

Anne entered as a lay sister (the path for the poor and uneducated who were called to work, as opposed to the more aristocratic choir nuns who chanted the divine office) but was dearly loved by St. Teresa herself. Teresa ordered her to learn to read and write and appointed Anne her secretary, taking her along on all the journeys she made to different convents for the last five years of Teresa’s life. The great Doctor of the Church, after whom St. Thérèse and Mother Teresa were named, died in the arms of a poor shepherd girl who had been illiterate until she was in her 20s.

It’s no surprise that such goings-on made the other sisters jealous and suspicious, particularly when (after Teresa’s death) Anne was asked to become a choir nun so that she could be a prioress. Despite the resistance of the others and her own reluctance, Anne was obedient, trusting in the will of her superiors and the prophecy Teresa had made known years earlier that she would be asked to do just that. She remarked to the Lord, though, that her elevation to this office was unjust, as she was just a weak straw. In a dream, Jesus responded to her, “With straws I light my fire.”

Anne spent the rest of her life working to set hearts ablaze for Jesus as a prioress in several different convents and as a spiritual writer and poet, but she never forgot her humble origins or grew too dignified for hard work. Through Anne’s faithfulness, the work of St. Teresa of Avila spread throughout Europe and eventually throughout the world.