The power of a wife can change the world 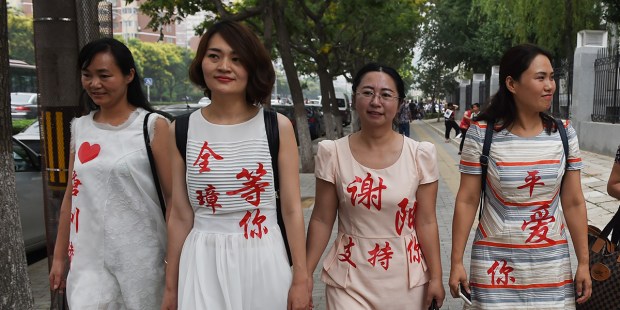 Greg Baker | AFP
In Beijing, the wives of human rights lawyers who were detained in 2015.
Share
Print
Calah Alexander | Jun 01, 2017

Chinese wife Chen Guiqiu reminds me of what’s true about marriage: a wife has more power than she realizes.

The Chinese have two words for the collective punishment of families: lianzuo and zhulian. That’s how successful the practice is. Though many have tried to fight back against the ongoing human rights abuses in China, perhaps none have been as successful as the wives of imprisoned and tortured human rights lawyers. They have fought fiercely and publicly for their husbands, despite the the government’s increasingly desperate measures to silence them.

Read more:
A workshop that helps wives fall in love with their husbands again

Their incredible story was the focus of a House subcommittee meeting last week. The New York Times details how these women are drawing attention to systematic government abuse, oppression, and coercion that have gone unchecked in China for years, and have culminated in a two-year government crackdown against their husbands.

“The story of the wives is one of the great stories of the whole crackdown — it is a brilliant adaptation by the activists to repression,” said Terence Halliday, a researcher at the American Bar Foundation in Chicago who has written a book on Chinese criminal defense lawyers. “My goodness, the attention they have brought to bear, not just for their husbands, but also the state of the crackdown.”

Chen Guiqiu, whose husband Xie Yang was arrested in the first wave of the crackdown, had always trusted the police. She even complied with their illegal requests, sure that her husband’s innocence and her silence would soon earn his freedom. It wasn’t until she was barred from taking her daughters on a trip to Hong Kong on the grounds that she was a “security risk” that she realized what was really going on — her husband wasn’t going to get tried fairly. The government already saw him as guilty, and his family as guilty by association.

So she took her daughters and fled. Chinese officials pursued them, all the way to the airport where U.S. embassy officials argued heatedly with Thai and Chinese officers over custody for hours, nearly coming to blows. She is still fighting for her husband from the U.S., despite his recent trial and conviction.

The power of Chen Guiqiu’s love and devotion is a remarkable contrast to what we usually see. We’re inundated with depictions of husbands as bumbling fools, lucky to have long-suffering, fondly exasperated wives. It’s an ugly caricature of a marriage.

But both images — wife as fiercely devoted and wife as fondly exasperated — remind me of what’s true about marriage: a wife has more power than she realizes.

You can see it in a sitcom, when a wife rolls her eyes at yet another dumb mistake, and her husband looks chastened. I can see it in my husband’s eyes when he starts cleaning the kitchen and I criticize him for not doing it right. I have the power to build him up, to love and defend him — a power so great that it can threaten an oppressive government. Why do I use it to bring him down?

Read more:
7 attitudes of biblical women for all Christians to imitate

There are all kinds of answers, but none of them matter. It’s wrong. Marriage can be a thing of beauty, a refuge and a fortress from within which my husband and I can face the world. Or it can be a battleground, strewn with the corpses of our hopes, dreams, and our love. The power to choose which it will be is up to me.

Mother Teresa famously said: “If you want to change the world, go home and love your family.” I’ve always thought that was one of those wise-but-pat sayings, meant to assure us moms that there is meaning in cleaning up toddler pee, again. But the story of the Chinese wives gives it a whole new meaning. I mean, staying home and loving my family — my husband — won’t necessarily change the world, but it will change our world.

And that’s the one I’m living in.