A day in the life of John Paul II 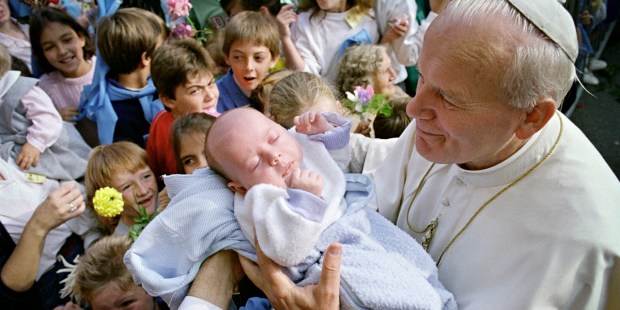 In an extensive interview, Archbishop Mieczysław Mokrzycki, a secretary to two popes, recalled a number of details from John Paul II’s everyday life. “I saw what others did not see,” the saint’s personal secretary can safely say.

John Paul II got up between 5:00 and 5:30 a.m. Usually he managed with a mere six and a half hours of sleep. “He woke up by himself. He had an alarm clock in his bedroom, but I do not remember him using it but once,” recalls Archbishop Mokrzycki.

Immediately after waking, the pope started to pray. “Later he took a shower, always a cold one, which as he claimed, was healthier,” adds the former papal secretary. Subsequently the Holy Father was readying himself to go to the chapel for meditation and Holy Mass.

When in the chapel, prior to Mass, the Holy Father would take out two sheets of paper — a list of Vatican employees. He would slowly read the names, pray and finally make the sign of the cross over the sheet of paper, blessing each of the Vatican staff.

Read more:
Pope Francis: Pay attention when you make the sign of the cross!

After Mass, in the library on the third floor of the Apostolic Palace, John Paul II met for a short conversation with those who had participated in the morning Eucharist. When the guests had left, he returned to the chapel to pray.

The Pontiff’s workday began after breakfast. On the way from the refectory to his apartment, the pope leafed through the press. At his bedroom desk John Paul II read liturgical texts and reflections on excerpts from Scripture, and then reviewed and signed documents. Two large files with documents were sent to the secretariat each day: one in the morning and the other one in the evening.

“The documents were neatly arranged. There were separate files with the documents awaiting the pope’s signature, correspondence from the cardinals, bishops and state officials as well as letters forwarded to the attention of the pope from the Secretary of State, the substitute, congregation prefects, and the press office. The Holy Father read it all. He would add comments and make notes on each document. For example, he asked people to come and talk to him about a certain matter or else to reply on his behalf. On other documents he simply made a note that he had familiarised himself with their contents,” says Archbishop Mokrzycki.

After breaking his arm, John Paul II did not write himself, but dictated his documents. Note-taking was one of the specific duties of Fr. Mokrzycki. “He would always dictate from memory. He never consulted books or scientific texts; all had been thoroughly reflected upon … Whatever he said was precise and did not require any corrections.”

Before his audiences, the Holy Father would depart for the terrace of the Apostolic Palace and pray the Rosary. Then he would go to the chapel. His official audiences took place in the library on the second floor. When the audiences were finished, the pope returned to the chapel.

The guests invited for lunch would gather in the Apostolic Palace before 1:30 p.m. John Paul II greeted them and led to a chapel for a moment of prayer; the chapel was revisited after the meal. When Fr. Stanisław Dziwisz saw the guests off, the pope once again became immersed in prayer.

“We had a rota: one day I was reading to the pope, and the other day it was Sr. Eufrozyna,” says Archbishop Mokrzycki. The pope would lie down on his bed with his eyes half-closed.

The pope could not catch up with reading all the books he received from individuals or publishing houses. Whenever he got new books, also during the Wednesday audiences, he immediately separated them into groups: some went to the library, others to the office, and still others were set aside for the holiday time in Castel Gandolfo. There was also a special pile of books for the Ursuline sister Emilia Ehrlich.

“She was not employed at the Vatican. She came to the Holy Father each Monday and familiarised him with abstracts of a few books. This prompted a short dialogue between them. She drew the pope’s attention to some aspects and clarified them, while the pope asked for details,” remembers Archbishop Mokrzycki.

After the book-reading time, the Holy Father recited the Vespers. Later he signed another batch of documents, around 30-40 of them, e.g. episcopal nominations.

The Holy Father listened to books from a variety of topics, ranging from literature, through history to theology and dogmatics. When listening to a book on dogmatics he would often say: “Let us move on to the next chapter.” When I was reading on, he would say: “I know this. Let us go on to the next chapter.” I suspect he knew much more than the authors and often did not find anything new in these texts, says Archbishop Mokrzycki.

John Paul II, following Polish tradition, sang a brief hymn to Our Lady of Czestochowa at the close of the day. Called “The Appeal of Jasna Gora” and popularized internationally by the pope at World Youth Days, the hymn asks Mary’s intercession and pledges, “Mary, Queen of Poland, I am by Your side, I remember, I keep watch!”

John Paul II finished his day at around 11 p.m. “He opened the bedroom window and looked at Rome for a longer time. And then he made a blessing with the sign of the cross. I think it was a blessing for the entire world,” reminisces Archbishop Mokrzycki.

This article is reprinted from Aleteia’s Polish edition.