The Eagle Scout on his way to sainthood 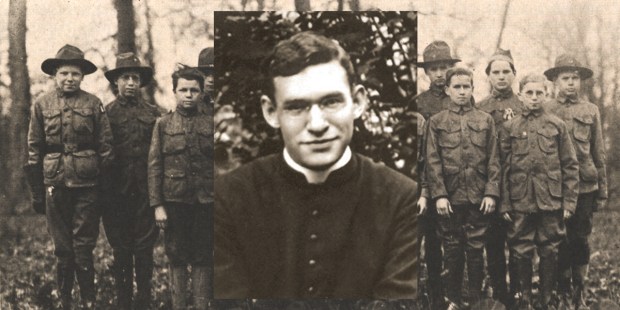 Francis J. Parater was always prepared both on the trail and in his path toward Heaven.

Born to a devout Catholic family in 1897 in Richmond, Virginia, Francis Parater became very active in the Boy Scouts of America (which at the time did not have the same struggles as it does now) while a teenager. He took to heart all that he learned and quickly assumed leadership roles within this troop.

Parater loved the outdoors and worked vigorously to achieve the rank of Eagle Scout. All those in the local community were proud of his many achievements and his leadership. During this time he discerned a call to the priesthood and entered the Belmont Abbey Seminary College in North Carolina in 1917.

He constantly strove for perfection while there, attending daily Mass and going to confession weekly. Parater even wrote up for himself a personal Rule of Life. He had a great devotion to the Sacred Heart and said, “…the Sacred Heart never fails those that love Him.”

While studying for the priesthood Parater was still active in the Boy Scouts, a “director of the summer camp for the Boy Scouts of America. The leaders of the Scouts saw such virtue and ideals in Frank that they wanted him to serve as a summer camp director supervising those who were his seniors. He was considered a ‘four-ply scout,’ exceptional in every way.”

After being sent to the North American College in Rome, Parater contracted rheumatism that developed into rheumatic fever. Three months later Parater died the day after the rector offered a votive Mass of the Sacred Heart for him. Parater left an envelope to be opened at his death, where he wrote the following Act of Oblation, summarizing his beautiful faith and trust in God.

I have nothing to leave or to give but my life and this I have consecrated to the Sacred Heart to be used as He wills … This is what I live for and in case of death what I die for. Since my childhood, I have wanted to die for God and my neighbor. Shall I have this grace? I do not know, but if I go on living, I shall live for this same purpose; every action of my life here is offered to God for the spread and success of the Catholic Church in Virginia. I shall be of more service to my diocese in Heaven than I can ever be on earth.

He also wrote a letter to his Scout troop in Virginia, encouraging them to draw closer in their love of God.

You may never see this letter, but if you do, it is to tell you that God has granted me the greatest desire of my life – to die for love of Him and of my fellow-man. Never fear death – it is the most beautiful thing in life, for it is the great portal to the real life. . . . Ever since I was a little fellow I have wanted to be like the martyrs of old, and give my life to God.

I have loved each of you, Boys, and, now that God has called me to Himself, don’t think that I shall forget you; nor shall I leave you – but will be much nearer to you than I could ever be in this life.

And now, old scouts, I must say ‘so long for a time.’ But occasionally think of your old friend and camp director, and when the time comes for you to hit the trail for home, I’ll promise to be near and to welcome you to the camp-fire of eternal life. God’s blessing be with you all.

The cause for his canonization was opened in 2001 and is currently underway, with a council examining his life and noting his exceptional life of virtue.