The Catacombs of Domitilla are back in business after 25 years of restorations.

The Catacombs of Domitilla will soon open their doors again to the public after 25 years of restoration work, i.Media learned at a press conference organized on May 30, 2017. Alongside its neighboring catacomb of St. Callixtus, the catacombs of Domitilla are the largest, the oldest, and the best preserved of them all.

These catacombs take their name from the owner of the surrounding land, Flavia Domitilla, who was converted by St. Peter before being executed under the Emperor Trajan in the first century. It was she who, on her land, ordered the construction of a first buried funeral gallery, called a “hypogeum.” Over the centuries, the tunnels have lengthened to 12 km. They spread over 4 levels, and contain around 26,000 graves.

Covering a large period in the history of the Roman empire, tombs, hollowed out and decorated between the 1st and 5th centuries, allow us to contemplate the evolution of funerary ornaments, both pagan and Christian.

“These tombs represent the roots of our deep identity, the roots of Rome and Christendom,” said Cardinal Gianfranco Ravasi, director of the Pontifical Commission for Sacred Archaeology, which financed the restoration work. Thanks to laser and scanning technologies developed by German and Austrian institutes, half of the 70 frescoes in the underground labyrinth were discovered.

Among the chambers, one of the most impressive is perhaps the so-called “room of the bakers.” Covered almost entirely with wall decors, it houses an immense image illustrating the stages of the supply of bread in Rome by the Annona — the institution in charge of this task — from the transport of cereals to the final distribution of bread.

Another excavation campaign at the end of the 19th century made it possible to find the semi-buried basilica of Nereus and Achilleus, named after two martyred contemporaries of Domitilla buried in the catacombs. The fully restored building will also be part of the course accessible to the public.

A mini-museum, built near the entrance of the basilica, will display exceptional sarcophagi, made in Greek marble. The official opening to the public is planned before the end of June. 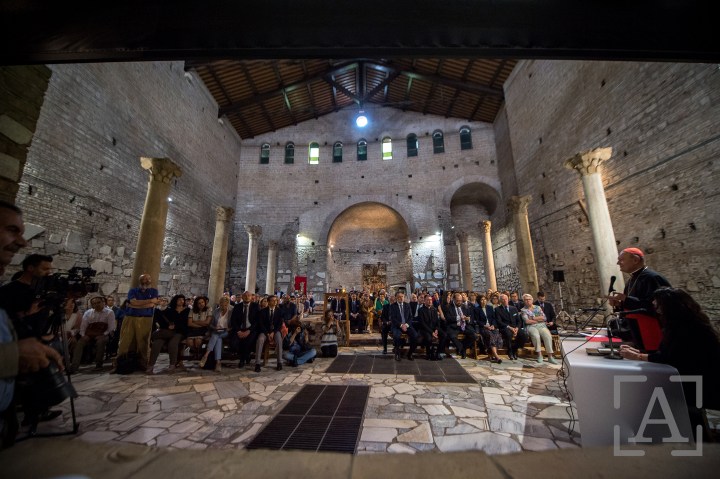