Pentecost vigil and ecumenical prayer with Pope Francis, on the occasion of the Golden Jubilee of the Charismatic Renewal 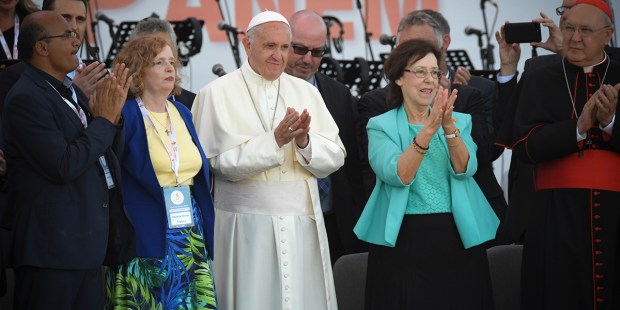 At 5.30 pm this afternoon (Rome time) the Holy Father Francesco left Casa Santa Marta, and went to the Circus Maximus for the Pentecost Vigil and Ecumenical Prayer, on the occasion of the Golden Jubilee of the Catholic Charismatic Renewal, which ends tomorrow with the Pentecost Mass, presided over by Pope Francis in St. Peter’s Square.

On stage, together with the Pope, leaders of Charismatic Renewal and representatives of the Evangelical and Pentecostal Churches and other religious confessions prayed together.

The meeting, which was preceded by songs, readings and testimonies, included the preachings of Father Raniero Cantalamessa, O.F.M. Chap., Preacher of the Pontifical House, and Pastor Giovanni Traettino, from the Gospel Church of Reconciliation.

Father Cantalamessa began his meditation with a reading of the second chapter of the Acts of the Apostles. We here transcribe both the reading and some excerpts of his meditation:

Now there were dwelling in Jerusalem Jews, devout men from every nation under heaven. And at this sound the multitude came together, and they were bewildered, because each one heard them speaking in his own language. And they were amazed and wondered, saying, “Are not all these who are speaking Galileans? And how is it that we hear, each of us in his own native language? Parthians and Medes and Elamites and residents of Mesopotamia, Judea and Cappadocia, Pontus and Asia, Phrygia and Pamphylia, Egypt and the parts of Libya belonging to Cyrene, and visitors from Rome, both Jews and proselytes, Cretans and Arabians, we hear them telling in our own tongues the mighty works of God.” And all were amazed and perplexed, saying to one another, “What does this mean?” (Acts 2:5-13)

This scene is repeating itself among us today. We too have come “from every nation under heaven,” and we are here to proclaim together “the mighty works of God.” There is, however, something else to discover in this part of the story of Pentecost. Since ancient times it has been understood that the author of Acts—and this means first of all the Holy Spirit!— through this insistence on the phenomenon of tongues, wanted to make us understand, that at Pentecost something takes place that reverses what happened at Babel. The Spirit transforms the linguistic chaos of Babel into a new harmony of voices. This explains why the account of Babel in Genesis 11 is traditionally inserted among the biblical readings for the Pentecost Vigil.

The builders of Babel were not, as it was once thought, wicked people who intended to defy God, a kind of equivalent of the Titans of Greek mythology. No, they were pious and religious people. The tower they wanted to construct was a temple to the divinity, one of those temples with layered terraces called ziggurat, whose ruins can still be found in Mesopotamia. What then was their sin? Let us listen to what they said among themselves when they started to work on it: “They said, ‘Come, let us build ourselves a city, and a tower with its top in the heavens, and let us make a name for ourselves, lest we be scattered abroad upon the face of the whole earth’” (Gen 11:4).

Martin Luther makes an illuminating observation about these words: “Let us build ourselves a city and a tower”: let us build it for ourselves, not for God. . . . “Let us make a name for ourselves”: let us do it for ourselves. The people take no concern for the name of God to be glorified; they are concerned with making their own name great.

In other words, God is being exploited; he must serve their desire for power. They perhaps thought, according to the mindset at that time, that by offering sacrifices from a great height they could win victories from the divinity over the neighboring peoples. This is the reason God was forced to confound their languages and derail their project.

This suddenly brings the matter of Babel and its builders very close to us. How many of the divisions among Christians have been due to a secret desire to make a name for ourselves, to elevate ourselves above others, to relate to God from a superior position in comparison to others! How many have been due to the desire to make a name for ourselves or for our own church more than for God! This is where our Babel comes from!

Let us turn now to Pentecost. Here too we see a group of men, the apostles, who are preparing to build a tower that goes from earth to heaven, the Church. At Babel they still spoke one single language, but at a certain point people no longer understood one another; at Pentecost all the people are speaking different languages, but everyone understands the apostles. Why? It is because the Holy Spirit had brought about a Copernican revolution in them.

Before this moment the apostles were also preoccupied with making a name for themselves, and they often discussed “who among them was the greatest.” Now the Holy Spirit has shifted their focus away from themselves and refocused them on Christ. The heart of stone has been shattered, and in its place beats “a heart of flesh” (Ezek 36:26). As Jesus had promised before leaving them, they were “baptized in the Holy Spirit” (see Act 1:5-8), that is, they were completely submerged in the ocean of God’s love that was poured out upon them (see Rom 5:5).

They are dazzled by the glory of God. Their speaking in diverse languages can also be explained by the fact that they were speaking with their eyes, with their faces, with their hands, with the amazement of people who have seen things too lofty to put in words. “We hear them telling in our own tongues the mighty works of God.” The reason they all understood the apostles is that they were no longer speaking about themselves but about God!

God is calling us to bring about that same conversion in our lives: a conversion from ourselves to God, from the smaller unity of our parish, our movement, our own church, to the greater unity that is the unity of the whole body of Christ, indeed of all of humanity. It is the bold step that Pope Francis is urging us Catholics to take and that representatives of other churches assembled here demonstrate they want to share!