This Wonder Woman’s power lies in her heart, not her fists 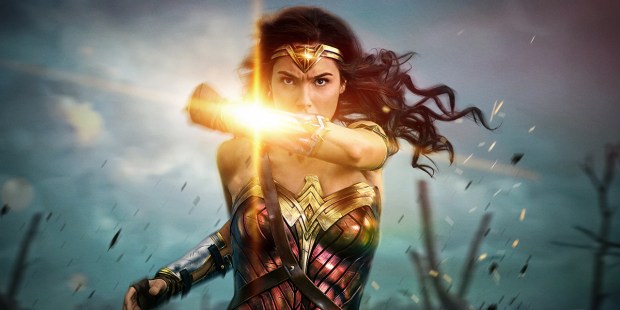 With a good mix of humor, pathos, and action, DC Comics gets it right.

Long before Gal Gadot was pegged to armor up as DC Comics’ Amazing Amazon, Hollywood had already graced us with the likes of Helen Slater’s Supergirl, Halle Berry’s Catwoman, and Jennifer Garner’s Elektra. In fact, we’ve even had a Wonder Woman movie of sorts; the justifiably forgotten 1974 made-for-TV effort starring Cathy Lee Crosby (look it up, I dare you). So, no, despite all the hype, this year’s Wonder Woman is hardly the first female superhero movie. What it may be, however, is the first female superhero movie you won’t hate yourself for watching.

Perhaps Warner Brothers has finally learned some lessons. While their recent re-imaginings of heroes like Superman and Batman have proven to be financially successful, they’ve been consistently savaged by critics and fans alike for entirely missing the point of their main characters. It turns out a whiney, indecisive Man of Steel and a kill-crazy Caped Crusader aren’t the heroes most people want or deserve. With Wonder Woman, they finally seem to be getting back on track.

That’s actually ironic, because out of DC Comics’ big three heroes (affectionately known as The Trinity to fans), Wonder Woman is the easiest to get wrong. Because she’s able to punch Superman off the planet, Wonder Woman is often written (poorly) as just a tough guy with breasts. However, those who understand the core of the character know that Wonder Woman’s true power lies not in her fists, but in her heart. She is driven by a love and compassion for all mankind, even her enemies. So, while she may knock out the bad guys on a Monday like any good superhero, on Tuesday she’ll visit them in jail to see if they need anything.

The creators of the new Wonder Woman film get this. So, instead of trying to reinvent the wheel, director Patty Jenkins and her writers simply stick to the basics that have worked since the character’s debut in 1941. The film starts where it should, with young Princess Diana being raised on the Island of Themyscira, a hidden paradise populated solely by the Amazons of Greek mythology. In order to preserve her child’s innocence, Queen Hippolyta (Connie Nielsen) forbids Diana from training with the rest of the warriors. The girl is headstrong, however, and convinces General Antiope (Robin Wright) to school her behind her mother’s back. It isn’t long before Diana becomes the mightiest warrior on the island.

And just in time. Pursued by German forces, Major Steve Trevor (Chris Pine) pierces the veil that hides Themyscira from the rest of the world and crashes his plane into the ocean. Diana manages to rescue the pilot while the Amazons tend to the hostile invaders. Taken before the queen, Steve is encircled with the golden Lasso of Truth and forced to tell of the events which led to his arrival. This is how the Amazons come to learn of World War I. Convinced that such a horror could only be the work of Ares, god of war and sworn enemy of the Amazons, Diana insists on accompanying Steve back into man’s world to reestablish peace.

What follows is a standard, but always engaging superhero story as Diana joins the war effort and helps Steve and his friends take on Dr. Poison (Elena Anaya), the Germans’ insane chemical weapons specialist. There’s plenty of action, including a pretty spectacular sequence set in and around a small village on the Western Front. Gal Gadot has claimed in interviews she trained harder for this film than she did for her actual military service in the Israeli army, and watching some of the fight scenes, that’s a believable statement.

It’s not all bullets and bracelets, though. There’s also comedy to be found, such as in Diana’s reaction to early 20th-century England (“It’s hideous!”) and the various historically accurate restrictions placed on women at the time. It’s easy to believe a princess from an all-female warrior society might not react too well to being excluded from men-only activities such as politics. Surprisingly though, for a setup ripe for misandry, there is precious little on display in the film. Whatever foibles the men in the movie have, it’s because they’re human, not because they have different body parts.

There is the possibility that all the mythological talk regarding Zeus creating the world and such could put off some religious viewers. Stick with it, though, and all the pagan packaging starts to look fairly familiar. Take the film’s ultimate big bad, for example. He may use a Greek name in the movie, but he turns out to be a guy who tried to usurp heaven, was cast down, and now spends his time whispering in the ears of men so as to corrupt their souls and ensure their damnation. Say what you want about Zack Snyder (who had a hand in the script), but the man does love his religious allegory.

There are some flaws in the film, of course, including one lamentable bit of CGI involving a misplaced head on a muscular body that is so laughable you will… well, laugh. Overall, though, the movie is a solid recommend, which should come as a big relief to concerned DC Comics fans everywhere. Wonder Woman may not be the first female superhero movie, but safe to say it’s the best so far.