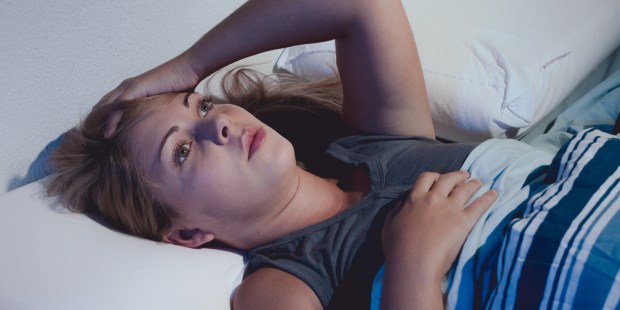 A sleep expert explains how ‘paradoxical thinking’ can help calm you down so you can fall asleep easier.

Anyone who’s struggled with insomnia knows how frustrating it can be to lie in bed for hours, begging your brain to turn off and let you sleep. Some of us might have even tried to short-circuit the whole process by popping a few Benadryl before bed. Funny thing about Benadryl: sometimes, even after years of use, it can suddenly have the reverse effect and keep you awake for three days straight. (Ask me how I know.)

The worst part about insomnia is that it’s a self-fulfilling prophecy. You don’t fall asleep as quickly as usual, so you start to worry that you won’t be able to sleep, which makes you anxious and prevents sleep. CNN recently published some tips from sleep experts on how to trick your brain into falling asleep, and one of the most fascinating ones is to try paradoxical thinking:

“Thinking about sleep and wishing for it to happen is a recipe for staying awake. This is where paradoxical thinking comes in. If you give yourself the paradoxical instruction to stay awake instead, you’ll be more likely to fall asleep.”

That’s the suggestion from Colin Espie, a professor of sleep medicine at the University of Oxford. Espie explains that when you try to fall asleep and can’t, you end up having performance anxiety and get frustrated, which wakes you up. If you can get comfortable with the idea of staying awake, then those emotions have nowhere to go and you can calm down.

But you might have more luck preventing insomnia by thinking ahead. Avoiding screens (especially smartphones) for at least an hour before bed can help your brain wind down, because the blue light from screens suppresses melatonin. Instead of watching TV or scrolling through Facebook, get in bed with a book and some warm milk.

And if you wake up in the middle of the night, don’t panic. Historically, humans slept in two four-hour periods a night, with an hour or more of wakefulness between them. We adapted to eight hours of unbroken sleep after the advent of electric lights shifted our bedtimes later, but it runs contrary to our evolutionary and ancestral sleep patterns. So don’t get anxious if you wake up at 3 a.m. — it doesn’t mean you’re not sleeping well. It actually means you’re sleeping just the way you’re supposed to.