Pope Francis: Pius XII “risked his neck” to save the Jews from deportation 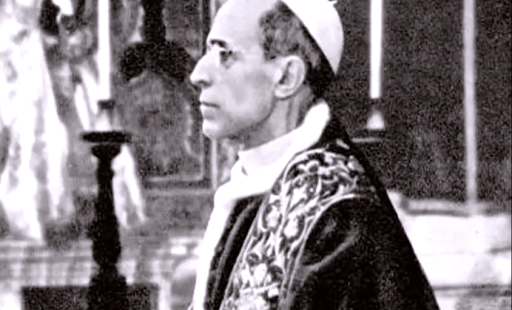 In his daily homily at Santa Marta, Pope Francis holds up his predecessor as an example of the merciful pastor who risked his life for others

Beginning  in the 1960s, contrary to the immediate post-war period, Pope Pius XII (1939-1958) was criticized for not having spoken strongly enough to denounce the deportation of Jews during the Second World War. The controversial thesis was promoted by a play by Rolf Hochhüth, The Representative, in 1963, and then by a film by Costa-Gavras, Amen, in 2002.

In December 2009, Pope Benedict XVI decided to proclaim “the heroic virtues” of Pius XII, thus declaring him Venerable. However, his process of beatification has not advanced.

According to the most recent evidence (provided by the testimonies of Jews, new documents, and archives), Pius XII helped 63% of the Jews, or two-thirds of the 9,975 (8,000 Romans and 1,975 foreigners) who were in Rome during the Nazi persecution.

Extolling his predecessor as an example of the merciful pastor who risks his life for others, Pope Francis said performing the works of mercy doesn’t mean just giving alms to assuage our consciences. Rather, for all of us it means sharing in the suffering of others, even at personal cost to ourselves.

Reflecting on the First Reading from the Book of Tobit, the Pope noted how Tobit was saddened and wept at the murder of a Jewish kinsman, whose body he brought inside to bury after sunset. Pope Francis reflected on the 7 corporal and 7 spiritual works of mercy, saying that performing them properly means not just sharing what we possess, but also sharing in the sufferings of others.

We do not do works of mercy to assuage our consciences, to make ourselves feel better, he said. Rather, the merciful person is the one who has pity on others and shares in their suffering.

“We must ask ourselves,” Pope Francis said: Do I know how to share? Am I generous? When I see someone in trouble, do I suffer too? Am I able to put myself in another person’s shoes?”

The Pope continued, noting how, in the Old Testament reading, the Jews had been deported to Assyria and were not allowed a proper burial. Therefore, Tobit risked being killed too – just as we must also take risks as we carry out works of mercy.

Recalling the Second World War years here in Rome, Pope Francis spoke of all those people, beginning with Pope Pius XII, who risked their own lives to save Jews from deportation and death.

“‘But I have a friend who is sick, and I would like to go and visit him, but I don’t really feel like it … I prefer to rest or watch TV … in peace.’ Doing the works of mercy always means feeling some inconvenience. They inconvenience us. But the Lord was inconvenienced for us: he went to the Cross. To give us mercy.”

Indeed, Pope Francis said, we perform works of mercy for others, because we know that we have been shown mercy by Our Lord first. We think about our mistakes, our sins, and how the Lord has forgiven us, so we do the same with our brothers and sisters.

“The works of mercy,” the Pope concluded, “keep us from selfish behavior and help us imitate Jesus more closely.”