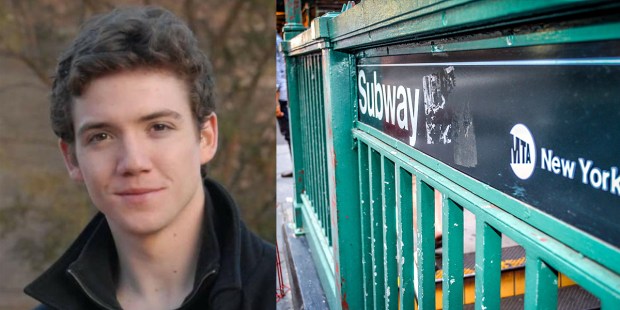 Compared to opera and some other art forms, ballet might not have a lot of drama. But the other night, one dancer from the American Ballet Theater gave some folks in New York City one of the most dramatic performances of his life. And it wasn’t even on stage.

Gray Davis, 31, was waiting on a subway platform in Manhattan with his wife and mother Saturday night around 11:20 when he got his cue—and sprang into a previously unrehearsed move. And a homeless man, who was pushed onto the train tracks, can applaud Davis for saving his life.

Davis, who is from Greenwood, South Carolina, was not dancing that night but had just been at the Metropolitan Opera House to watch his wife, Cassandra Trenary, perform in “The Golden Cockerel.” Because of service disruptions, they didn’t use the station closest to Lincoln Center, where the opera house is located, but walked uptown to the 72nd Street/Broadway station.

Meanwhile, a homeless man, 58, who was not identified, was in an argument with a woman inside the subway station. Davis and his wife and mother arrived and waited on the platform for a downtown train. The altercation, on the other side of the tracks, heated up so much that Trenary sent Davis to get help. He went upstairs to where the token booth is located, but the booth was empty. He then went downstairs to the uptown platform.

Just as he got there, the woman pushed the man onto the track and then fled on foot. The man was knocked unconscious after hitting the tracks. Davis made a decision fairly quickly.

“At first I waited for somebody else to jump down there,” Davis told the New York Times Monday, “People were screaming to get help. But nobody jumped down. So I jumped down.”

Davis said he picked up the man and lifted him to the platform, where others pulled him up. The Times describes the scene:

Then, hearing a train in the distance and unsure which track it was on, he faced the next problem: getting back up on the platform himself.

“I never realized how high it was,” he said. “Luckily, I’m a ballet dancer, so I swung my leg up.”

Davis later admitted how scary the situation was. “I don’t know if I had time to process it until I saw my wife coming down crying,” he said, “then I realized it was scary.”