The 6 best performances from the “One Love” Manchester concert 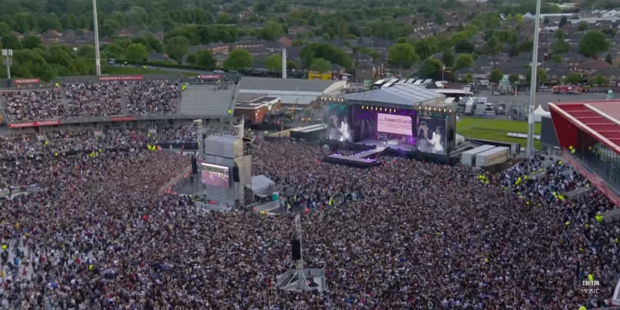 There were many highlights, but Coldplay’s Chris Martin stood out.

A bare two weeks after 22 of her fans were killed (and over 100 injured) as they made their way out of Manchester Arena, Ariana Grande managed to put together a benefit event for the victims and their families. She assembled some of the biggest names from both sides of the pond for the “One Love” concert, held at Old Trafford Stadium in Stretford.

Chris Martin, lead singer of Coldplay, broke from his band for a moment with Ariana Grande and Coldplay’s guitarist Johnny Buckland to perform Oasis’ “Don’t Look Back In Anger,” written by Noel Gallagher. Oasis has long been one of the inspirations of Coldplay.

Robbie Williams released “Angels” 1997. It quickly became his biggest hit and in 2005 was voted the best song of the past 25 years at the Brit Awards. At the end of this performance he changes the lyrics of another of his songs, “Strong,” in tribute to Manchester.

Coldplay’s sound is often compared to U2, which makes sense since they have both reached the same level of fame as The Beatles. “Fix You” was written by the entire band and takes inspiration from Jimmy Cliff’s 1969 song “Many Rivers to Cross.”

Liam Gallagher was originally supposed to appear on the “One Love” stage with his brother and former band-mate Noel. Unfortunately, Noel caused a bit of controversy by skipping the show. We are sure that Noel would have accompanied Liam on the guitar, but Coldplay’s Chris Martin was up to the task and the two played Noel’s tune without him.

Mumford and Sons released “Timshel” on their 2009 album Sigh No More. Timshel is a Hebrew word which means “thou mayest,” and the song was directly inspired by John Steinbeck’s novel East of Eden, which parallels the story of Cain and Abel from Genesis.

The two biggest female millennial pop-stars shared the stage to duet “Don’t Dream It’s Over” by Crowded House. They put on a wholesome, uplifting act which engages the audience well. Cyrus, who recently opened up about her new-found sobriety, is beginning to sound like a young Stevie Nicks in her vocals.

The entire concert is on Youtube, but if you can’t watch it all, do check out Grande’s encore, where she appeared emotionally overcome and exhausted, understandably so.