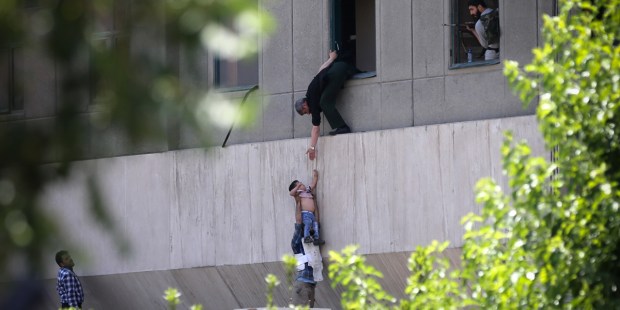 Storming parliament and tomb of ayatollah in Tehran, assailants claim at least 12 lives

The Islamic State immediately claimed responsibility for a dramatic attack on Iran’s parliament and a shrine to its former ayatollah Wednesday that left at least 12 people dead.

The double attack in Tehran, on the national parliament and the mausoleum of the Islamic Republic’s founder, Ayatollah Ruhollah Khomeini, was the first time that ISIS, a Sunni Muslim extremist group, has claimed responsibility for an assault inside Iran, which is predominately Shiite Muslim, the New York Times pointed out. “The terrorist group is battling with Iranian-backed forces in Iraq and in Syria, and it views Shiite Muslims as apostates,” the Times explained.

Beginning at 10:30 a.m. local time, men armed with assault rifles and suicide vests stormed the parliament, killing at least one security guard and wounding and kidnapping other people. Some of the attackers were dressed as women. An ensuing standoff lasted four hours. At one point, one of the attackers left the building and roamed nearby streets, shooting at people. Inside, one assailant blew himself up, and others shot from windows onto the streets below.

At 11 a.m., 10 miles to the south, another group began an assault on the mausoleum, which is popular with tourists and pilgrims. During the 90-minute siege, at least one attacker detonated explosives.

It’s been reported that at least six of the attackers died in the twin operations.