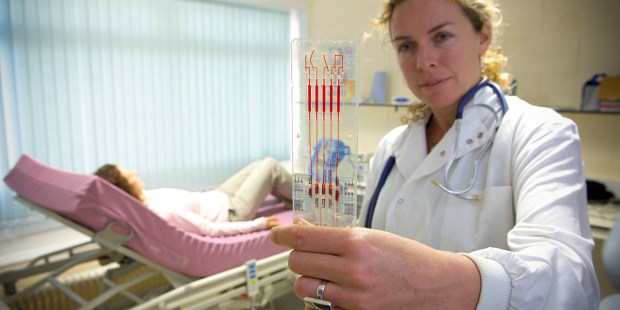 This “liquid biopsy” can catch cancer up to 10 years before symptoms appear.

Researchers from the University of Bradford in the UK have discovered a method which can identify the presence of cancer in a subject with a simple blood test. New Atlas has lead researcher Diana Anderson discussing the process:

“White blood cells are part of the body’s natural defense system,” says Professor Diana Anderson, who led the research. “We know that they are under stress when they are fighting cancer or other diseases, so I wondered whether anything measurable could be seen if we put them under further stress with UVA light.”

Her research team at BU began testing samples and found the DNA of patients with cancer were more damaged by the UV light than patients without. Precancerous subjects, or patients suspected of cancer can be identified apart from healthy subjects as well.

Daily Mail reports that doctors at Memorial Sloan Kettering Cancer Centre in New York have begun testing this screening method of patients already diagnosed with cancer. The test has proven to be 90 percent accurate, through 161 patients.

The findings were announced at the world’s largest oncology conference in Chicago. Doctors are excited by the possibilities of an accurate, non-invasive test for cancer, which can be performed alongside tests for cholesterol and blood sugar.

The project has received funding from Bill Gates and Amazon founder Jeff Bezos. The process currently costs around £775 (about $1,000 US), but researchers hope to make it available for a more reasonable £155 ($200 US) . The development team is working to bring this test to general practitioners as soon as possible.