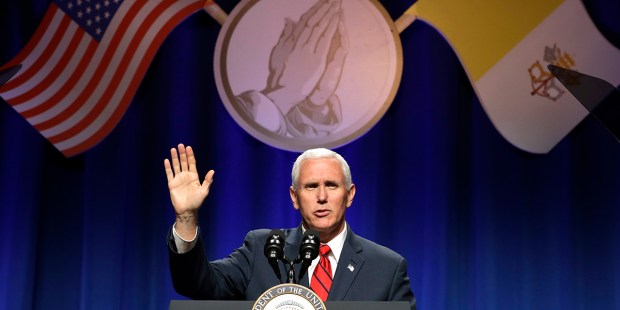 Vice President Pence and others reminded us that a common love of God can bring us together.

While en route to Tuesday morning’s National Catholic Prayer Breakfast, I wondered with droopy-eyed concern why prayer lunches or prayer suppers have never become popular. Does dawn really present itself as an ideal time for social gatherings, however prayerful in nature? My musings were selfish, of course; I longed that senseless longing for another 15 minutes of sleep.

My self-concern was chastened, however, when I arrived at the venue. At 6:30 in the morning, the hotel ballroom was already a hive of activity as a thousand people excitedly said their hellos, took pictures, and found their seats. The vibe was infectious. The room was electric as clergy, religious, and laity from around the country assembled to pray for the nation and to celebrate the life of the Catholic Church in America.

The breakfast’s organizers describe the annual event as one “response to St. John Paul II’s call for a New Evangelization.” Accordingly, speakers are chosen each year to highlight the vibrancy of the Church’s life in the U.S. Their task is to tell the stories of Christian witness—personal and otherwise—often neglected by the national media. This year’s speakers fulfilled their appointed roles. After a communal recitation of the Divine Mercy Chaplet, each spoke inspiringly of what Christian faith and virtue provide to the common life of the nation.

First, Archbishop Timothy Broglio of the Archdiocese for the Military Services reminded listeners that faith and citizenship are not opposing virtues. Christian faith is naturally oriented to service of neighbor, he explained. Specifically, faith and charity inform the cardinal virtues to orient the believer toward sacrifice for one’s community. Thus does faith assist the molding of a people into a nation.

To illustrate his point, Archbishop Broglio recalled the witness of Fr. Verbis Lafleur, an American military chaplain during the Second World War. Reared on the Cajun prairies of south Louisiana, Fr. Lafleur was ordained a priest in 1938. By 1941, he was an enlisted chaplain assigned to Clark Field in the Philippines, arriving at his assignment just days before the Japanese bombardment of December 8. After a year of evading the Japanese army, Fr. Lafleur’s company fell into enemy hands. For the next two and a half years, the Cajun priest served his flock as a POW. In 1944, while en route to Japan, Fr. Lafleur’s prisoner ship was accidentally torpedoed by the U.S. Navy. The priest refused to leave the ship’s hold until he helped every soldier to safety. Tragically, the ship sank before Fr. Lafleur could emerge with the last of his soldier-sheep. Archbishop Broglio concluded that Fr. Lafleur’s life and death witness iconically to the way in which faith has consistently worked to perfect the American character.

Second on the program was Mother Olga of the Sacred Heart. She stole the show. Largely unknown by everyone in the room (but not to regular readers of Aleteia!), Mother Olga spoke movingly of her Christian upbringing in Iraq. Against difficult odds, she founded a community of women to care for the poor, the first religious community to be founded in Iraq in more than 700 years. As a religious, then Sr. Olga spent seven years serving in the infamous Abu Ghraib prison, her principal task being to bury the dead. In 2001, Sr. Olga immigrated to the U.S. in order to study theology and learn English. Settling in Boston, she discovered a new home and planted deep roots, leading her to become an American citizen in 2007. Shortly afterward, Cardinal O’Malley requested that she found a new religious community in New England. Now Mother Olga, this diminutive Iraqi religious—she was dwarfed by the podium at which she stood—testified in her very person that both the Church and America remain a welcoming home for the immigrant. As Mother Olga concluded her remarks by singing alone and a capella “This Is My Song, O God of All the Nations”—the sweet American text intoned in an Arabic accent—she exemplified what is best about America—and the Church. Though little known today, “Mother Olga” is a name we’ll be hearing more in the future.

Lastly, Vice President Mike Pence addressed the breakfast, which he described as a type of “homecoming.” The vice president spoke glowingly of his south Indiana childhood as part of a “midsize Catholic family,” his euphemism for an Irish family of six children. He recalled how he attended Catholic school and served Mass with his brothers. Though the vice president acknowledged that his “faith journey” has led him away from the Church—the statement deflated the room—he hailed Catholic institutions, particularly schools and hospitals, for the role that they have played in building up American society. These institutions, he said, are “woven into the fabric of America.” As such, they have left an “indelible mark on the American spirit,” and the people who serve them are “a force for good in our communities.” For this reason, the vice president continued, the Trump administration has taken an aggressive stand to defend religious liberty, arguing that the price of participation in American public life should not be the violation of conscience. The vice president ended his remarks with an appeal to American Catholics to continue to pray and to witness to the truth of the Gospel in their communities.

At a time when our national life is divided along ideological lines, the National Catholic Prayer Breakfast serves to remind us that a common love for God and country remains a powerful unifier for a diverse citizenry. God is one, and so is his Church, and the unity to which both draw believers can serve as a leaven for the unity of the nation.

Archbishop Broglio, Mother Olga, and Vice President Pence each detailed a facet of this mystery early Tuesday morning. May their witness be a clarion call to Catholics and their compatriots to greater faith and unity in the search for peace.