What is the Liturgy of the Hours? 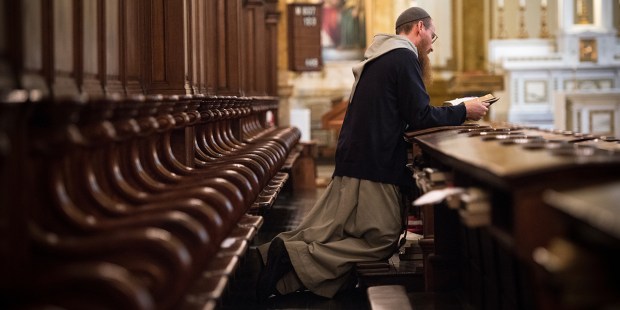 Priests and religious often pray from a small black book throughout the day — what are they praying?

It is common to see priests or religious stop during the day to offer prayers out of a small black book. Sometimes even lay people will have that same black book and sit in the back pew of church to pray. What is it that they are praying?

Priests, religious and deacons are obligated to pray daily what is called the Liturgy of the Hours, also known as the Divine Office. It consists of praying a set of prayers each day at different times, from morning to night. It is a prayer routine not only reserved for those consecrated to God, but also a common prayer practice for the laity.

Historically Jews prayed at fixed intervals throughout the day. King David, who is believed to have written the psalms, proclaims,

Evening and morning and at noon
I utter my complaint and moan,
and he will hear my voice. (Psalm 55:17)

Even the prophet Daniel is shown to have prayed at specific intervals.

When Daniel knew that the document had been signed, he went to his house where he had windows in his upper chamber open toward Jerusalem; and he got down upon his knees three times a day and prayed and gave thanks before his God, as he had done previously.” (Daniel 6:10).

The Jewish people began a tradition of praying three times a day: morning, afternoon and evening. This developed into a program of praying the psalms in particular as they expressed the many desires of the human heart. Jesus is recorded praying the psalms on multiple occasions, most famously the words of Psalm 22 uttered from the cross: “My God, my God, why hast thou forsaken me?”

Since most of the early Christians were converts from Judaism they continued the Jewish tradition of praying the psalms. This type of prayer was maintained as the Church grew and, as Father Timothy Gallagher notes in his book Praying the Liturgy of the Hours, “Throughout the Church, in Palestine, Antioch, Constantinople and Africa, Christians gathered in their churches twice each day to pray the psalms. Daily they assembled for ‘morning and evening hymns.'”

Later on this tradition was expanded in monasteries to praying the psalms seven or eight times a day, striving to live out the words of Saint Paul to “pray without ceasing” (1 Thessalonians 5:17). This tradition looks like this:

The Church spread out the 150 Psalms over the course of these hours and eventually created a cycle of prayer. Currently it consists of a four-week Psalter where all the Psalms are prayed throughout a period of four weeks (if all of the “hours” of prayer are observed).

Contemplative monasteries keep to this rhythm of prayer, while priests and other active religious tend to “clump” the hours together. For example, if a parish priest is in meetings all afternoon and evening, he will pray Evening Prayer and Night Prayer immediately following each other before retiring for bed. The time of day is less an issue for those in the world than it is for men and women of the cloister, who abide by a sacred rhythm of prayer and work.

Since Vatican II the Church has continued to promote this practice and has encouraged the laity to join in this Liturgy.

Pastors of souls should see to it that the chief hours, especially Vespers, are celebrated in common in church on Sundays and the more solemn feasts. And the laity, too, are encouraged to recite the divine office, either with the priests, or among themselves, or even individually” (Sacrosanctum Concilium, 100).

But how does someone pray the Divine Office?