Where should babies sleep? The answer is … complicated 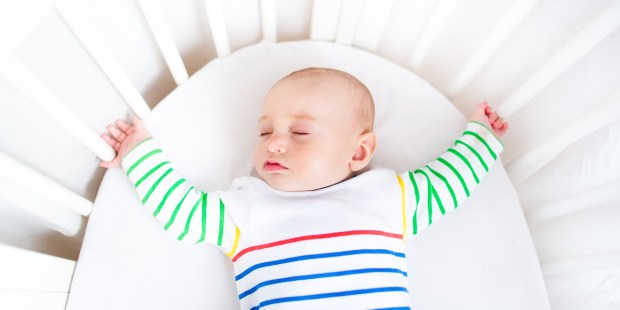 A new study says babies sleep better in separate rooms, but I’m taking that with a grain of salt.

As a new mother, you can imagine how headlines like “Babies Sleep Better In Their Own Rooms After 4 Months, Study Finds” catch my eye. It seems like nearly every day, there’s new advice about babies and sleeping – where they should (or shouldn’t) sleep, how long they should sleep, etc. The messages are often competing, and it can be confusing and exhausting (especially for a new parent!) to try to keep up with the latest expert recommendations. Unfortunately, a new study does little to clear up any of the confusion surrounding infant sleep.

When we brought our little guy home three-and-a-half months ago, we had planned on having him sleep in a bassinet next to our bed. We followed the recommendation of the American Academy of Pediatrics (AAP) and chose to have Gabriel sleep in our room for at least the first 6 months (and ideally, up to 12 months) of his life in order to prevent Sudden Infant Death Syndrome (SIDS). Plus, the AAP and other organizations note that greater nighttime proximity to baby is more conducive to exclusive breastfeeding, which we decided was the right choice for our family. However, results from the recently published INSIGHT sleeping study claim that the data to support the recommendation that infants sleep in their parents’ rooms from 6 months to 12 months is “weak,” and that superior sleep outcomes (which they define as longer stretches of sleep, and more total sleep per night) may be achieved by transitioning babies to their own rooms much earlier.

The reasons for this are twofold: First, although SIDS claimed the lives of 1,600 babies in 2015 (according to the CDC), only 10 percent of those deaths occurred after 6 months of age; second, INSIGHT results indicate that “early independent sleepers” (babies sleeping on their own at less than 4 months of age) may sleep for longer stretches of time in their own rooms than babies who share rooms with their parents. Early independent sleepers had longer stretches of sleep than 4-month-olds still sharing a room with their parents, but did not get more total sleep than the 4-month-old room-sharing babies. By 9 months, early independent sleepers slept for about 40 minutes longer each night than room-sharing babies of the same age. Room-sharing also seemed to modestly affect babies’ sleep into toddlerhood, with 2.5-year-olds who had shared rooms with their parents through 9 months of age getting 45 minutes less sleep at night than babies who were sleeping independently at 9 months (although both groups had the same daily total of sleep – yay nap time!). The authors also note that waiting until babies are 12 months old to transition them to their own sleep space is not ideal, as separation anxiety increases at this age.

So what’s a parent to do with this new information? Three months ago, after a few too many sleepless nights with a newborn who wouldn’t fall asleep anywhere but on my breast, my husband and I made the decision to co-sleep (sometimes called “bed-sharing”). We implemented all of the recommendations to do so safely, and after all three of us started sleeping much better, we never looked back – after all, most of the rest of the world does it. People like us (who decide to co-sleep from the get-go) were left out of this study since the AAP advises against bed-sharing.

So, you could say that I’m taking these new recommendations with a grain of salt, and deciding – along with my husband – what circumstances best fit our individual baby, and our family. And while I would never tell anyone to ignore the advice of experts, I believe that at the end of the day, all parents need to go with their instincts and do the same – especially when the experts themselves can’t seem to agree on what’s best!