Once known for his anti-Semitic sentiments, Fr. Marceli Godlewski helped the Jews in the Warsaw Ghetto when it mattered most.

In 1940, when the Germans decided to set up a ghetto within the limits of Poland’s capital, All Saints Church was located within its perimeter. The parish priest at that time was Fr. Marceli Godlewski. According to estimates, along with the parish curate, Fr. Antoni Czarnecki, Fr. Godlewski was able to save from a thousand up to as many as three thousand Jews. Because of his actions he is remembered as a hero, although before World War II he was known for his anti-Semitic sentiments.

On July 7, the International Raoul Wallenberg Foundation (IRWF) awarded the Church of all Saints in Warsaw the honorary title of “House of Life.” Since 2014, this is how the Foundation has commemorated places which offered assistance and refuge to the Jews during the Holocaust. “This initiative is first and foremost about cherishing remembrance of goodness and gratitude,” says Silvia Constantini, Deputy Chairwoman for Europe of the Raoul Wallenberg Foundation.

A parish within the Warsaw Ghetto

Father Marceli Godlewski, born in 1865, an avid pastor, social activist and publisher, planned to spend his retirement in the town of Anin, on the outskirts of Warsaw. His house in this beautiful neighborhood had nearly been completed and everything seemed to go according to plan, when the Second World War broke out in 1939. At that time Father Godlewski was pastor of the large parish of All Saints in Warsaw.

In 1940, when the Germans decided to set up a ghetto within the limits of Poland’s capital, the largest Jewish quarter in Nazi-occupied Europe, All Saints Church was located within its perimeter. Father Godlewski decided to remain in his parish and lived on the premises of the ghetto until its complete destruction in July 1942.

An estimated 450,000 Jews are said to have lived in the Warsaw Ghetto (the Arians had to move out of this area). A few thousand of the Jews adopted Christianity, including about 2,000 Jews that Fr. Godlewski helped a convert to Catholicism in his parish. Their position was extremely fragile, as on the one hand their Catholic faith did not prevent them from persecution at the hands of the Nazis, and on the other hand they were seen as renegades by the Jews practicing Judaism. Yet Fr. Godlewski provided assistance to all: shelter and help was offered to everyone in need.

Around a hundred people were hiding on parish premises. The parish priest, along with the curate, Fr. Antoni Czarnecki, would issue forged baptism certificates, indispensable for survival on the Arian side of the Ghetto wall. In addition to smuggling information to assist the Jews living in the ghetto,  he set up a kitchen which served about a hundred meals a day, and converted his house in Anin into an orphanage, run by the Franciscan Sisters of the Family of Mary (their mother superior, Sr. Matylda Getter, is named among the Righteous Among the Nations). Fr. Godlewski moreover helped many people to escape from the Warsaw Ghetto.

Those owing their lives to him include Prof. Ludwik Hirszfeld, an eminent physician and immunologist, later nominated to the Nobel Prize for medicine, who discovered ABO blood types and was the first to point out the cause of the serological conflict between mother and child.

This is how Prof. Hirszfeld reminisced about Fr. Godlewski, whom he knew very well as he was one of those who had found shelter in the presbytery of the Church of All Saints in Warsaw:

“When I recall his name, I am greatly touched. Violence and love in one soul. Once a belligerent anti-Semite, fighting the Jews in speech and writing, when faced with the ultimate depth of human deprivation, he rejected his earlier beliefs, dedicating to the Jews the entire warmth of his priestly heart.”

As Silvia Constantini from the Wallenberg Foundation stresses, the most important thing is what kind of decision we take in particular circumstances: shall we choose darkness or shall we choose light and bravely do the right thing. Father Marceli Godlewski chose the path of light and therefore his story has never ceased to inspire others.

The first “House of Life” in Poland

In 2009, many years after his death (in 1945), Fr. Marceli Godlewski was awarded the Righteous Among the Nations Medal from the Yad Vashem Institute. On 7 June 2017, thanks to his superhuman courage and dedication, a plaque was unveiled on a wall of the All Saints Church in Warsaw, with an inscription in English: “This building served as a hiding place to innocent people, persecuted by the Nazis.”

This is how the Wallenberg Foundation pays tribute to places honored with the prestigious “House of Life” title. At present, there are around 300 such places, the Warsaw church being the first House of Life in Poland. Let us only hope it will not be the last one, as there were many more people like Fr. Godlewski, who remained human in this most inhuman of times, risking their own lives to help fellow humans. 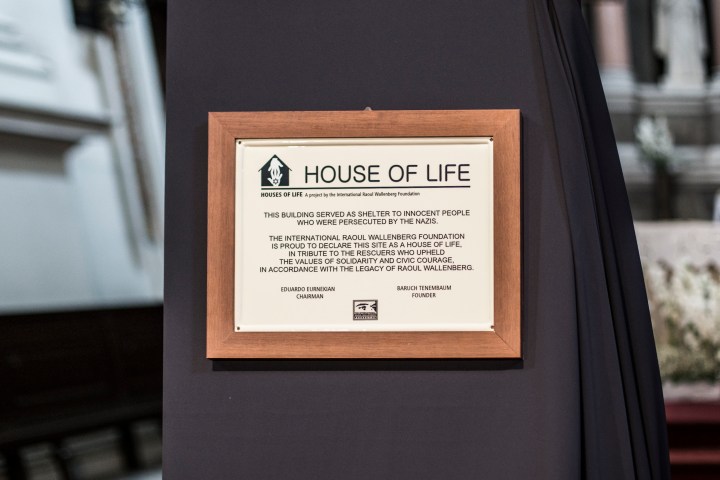