5 Ancient symbols of the Trinity 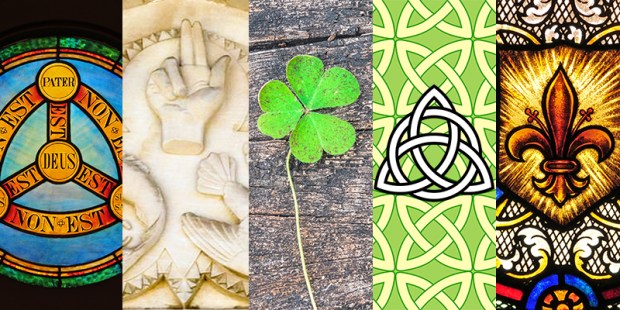 Over the centuries artists have used various symbols to represent the Triune God.

Representing the Trinity in sacred art has always been a rather tall order. How does an artist represent this basic tenet of our faith that is so mysterious and incomprehensible?

Nevertheless, artists have done what they can to make the Trinity visible in a way that the Christian faithful can understand and recognize.

Besides painting the Trinity using human form, artists of the ancient world also created symbolic representations to identify our Trinitarian God. Here are five of those symbols that artists have used for centuries to represent the Blessed Trinity.

Sometimes referred to as the triquetra, the symbol contains three leaf-like shapes that interlock, making three corners, and sometimes with a circle in the middle (representing eternal life). It is a simple representation of the Trinity and is most often associated with Celtic art, such as the Book of Kells.

2. Shield of the Trinity

This ancient symbol shows visually how each of the three persons of the Trinity is God, but distinct, and is most often used as a tool of catechesis.

There are many different variations of the triangle, some that contain other symbols of each of the three divine persons, while others simply use a triangle without any other additions.

Often attributed to Saint Patrick, the three-leaf clover has become one of the most easily identifiable depictions of the Trinity in art.

Most commonly identified with French nobility and the Blessed Virgin Mary, the Fleur-de-lis was also used to represent the Holy Trinity.