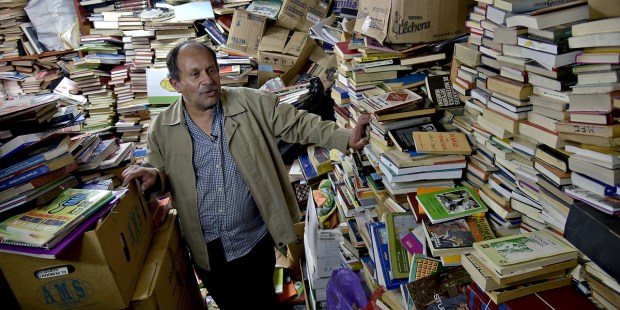 Known as “The Lord of Books,” Jose Alberto Gutierrez hopes to pass along a love of reading to low-income families.

They say that one man’s trash is another man’s treasure, and Jose Alberto Gutierrez, a garbage collector in Bogota, has salvaged something spectacular out of people’s castoffs: a free community lending library.

Over the past 20 years, while driving his route on the garbage truck, Gutierrez has collected more than 20,000 books, which he has turned into a library he calls La Fuerza de las Palabras (Spanish for “The Strength of Words”) inside his home.

According to a report in The Telegraph, the first book Gutierrez, known as the “Lord of Books,” ever brought home was Tolstoy’s Anna Karenina. He could hardly believe someone would toss it out.

While he grew up in poverty and had to leave school at a young age, his mother instilled in him a life-long love for reading. “I got my inspiration from my mom,” he said in a CGTN video about his library.

“When I was little she would read to us every night.” His goal is to pass on that love to children from low-income families who might not otherwise have access to books.

“The whole value of what we do lies in helping kids start reading,” he told Al Jazeera.

His vocation was inspiring by his own experience of reading as a child. When he was 13, Gutierrez picked up a copy of Homer’s Odyssey, which changed his perspective forever.

“After reading it, I became a traveler in my own odyssey. I will only reach my Ithaca when I see libraries and books everywhere in my country.”

Gutierrez has run out of room in his home, which he shares with his wife and three children, and is now traveling around the country delivering books to poor districts where there is no public library, according to a report in the Telegraph.