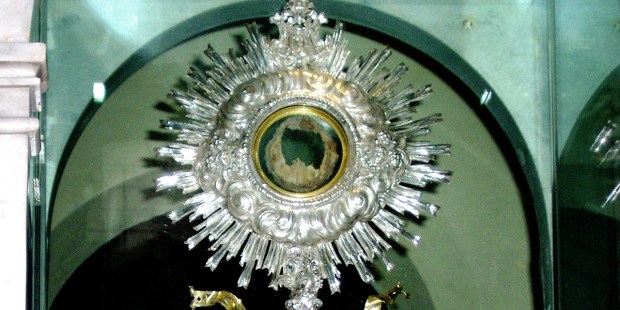 This means that while the appearances of bread and wine remain, the substance is changed (through the power of God) completely to the body and blood of Christ. It is a teaching based on scripture and tradition and has remained unchanged in its essence since Apostolic times.

However, the Church has recognized that on occasion, God intervenes in a more visible way and can change even the appearances of the bread and wine into his body and blood. Or God may miraculously preserve a consecrated host for an extended amount of time, past what is natural for bread.

Even though the Church does not base her teaching on these miracles, but on Christ’s word, when God chooses to do such miracles there is usually a flowering of belief in the Eucharistic Presence of Jesus Christ.

Read more:
Demons Believe and Tremble before the Real Presence

Here are four of the most incredible Eucharistic miracles that have been examined by top scientists around the world, who ultimately concluded that science could not explain the miraculous phenomenon.

In the 8th century, a priest had doubts about the real presence of Christ in the Eucharist. One day during Mass, after the consecration, the bread and wine turned visibly into flesh and blood. In 1970-’71 and again in 1981, a scientific investigation was led by the scientist Odoardo Linoli, professor of anatomy and pathological histology and in chemistry and clinical microscopy. He was assisted by Prof. Ruggero Bertelli of the University of Siena.

They concluded that the flesh is cardiac tissue which contains arterioles, veins, and nerve fibers. The blood type (in unison with all other approved Eucharistic miracles) was discovered to be type AB. According to Zenit, the “Higher Council of the World Health Organization (WHO) appointed a scientific commission to verify the Italian doctor’s conclusions. The work was carried out over 15 months with a total of 500 examinations… [and confirmed] science’s inability to explain the phenomenon.”

In 2013, Bishop Zbigniew Kiernikowski, of the Diocese of Legnica stated:

On 25th December, 2013, during the distribution of the Holy Communion, a consecrated host fell to the floor and then was picked up and placed in a water-filled container (vasculum). Soon after, stains of red colour appeared. The former Bishop of Legnica, Stefan Cichy, set up a commission to observe the phenomenon. In February 2014, a tiny red fragment of the host was separated and put on a corporal. The Commission ordered to take samples in order to conduct the thorough tests by the relevant research institutes.

After the investigations, the Department of Forensic Medicine stated:

On August 18, 1996, as Fr. Alejandro Pezet concluded Mass at the parish of Santa Maria y Caballito Almagro, a woman reported that a consecrated host had been desecrated on a candle holder in the back of the church. Unable to consume the Host, Fr. Pezet placed it in a dish of water and stored it in the tabernacle.

The following Monday, the priest opened the tabernacle and found the host appeared to be a bloody substance. The miracle was reported to Cardinal Jorge Bergoglio (the future Pope Francis), who led an investigation into the miracle after the bloody host was miraculously preserved for several years.

According to the magazine Miłujcie się!, “On October 5, 1999, in the presence of the Cardinal’s representatives, scientist Dr. Ricardo Castañón Gómez took a sample of the bloody fragment and sent it to New York for analysis.”

One of these scientists was Dr. Frederic Zugiba, the well-known cardiologist and forensic pathologist. He determined that the analyzed substance was real flesh and blood containing human DNA. Zugiba testified that “the analyzed material is a fragment of the heart muscle found in the wall of the left ventricle close to the valves. This muscle is responsible for the contraction of the heart. It should be borne in mind that the left cardiac ventricle pumps blood to all parts of the body. The heart muscle is in an inflammatory condition and contains a large number of white blood cells. This indicates that the heart was alive at the time the sample was taken. It is my contention that the heart was alive, since white blood cells die outside a living organism. They require a living organism to sustain them. Thus, their presence indicates that the heart was alive when the sample was taken. What is more, these white blood cells had penetrated the tissue, which further indicates that the heart had been under severe stress, as if the owner had been beaten severely about the chest.

On October 21, 2006, during a parish retreat, a consecrated host that was about to be distributed effused a reddish substance. The Bishop of the place, Most Reverend Alejo Zavala Castro, convened a theological commission of investigation to determine if it was a hoax or a genuine miracle. In October 2009, he invited Dr. Ricardo Castañón Gómez to conduct scientific research with a team of scientists and verify the miraculous nature of the occurrence. Dr. Gómez had recently finished his investigation into the miracle that occurred in Buenos Aires.

The scientific research conducted between October 2009 and October 2012 released the following statement:

The reddish substance analyzed corresponds to blood in which there are hemoglobin and DNA of human origin.

Two studies conducted by eminent forensic experts with different methodologies have shown that the substance originates from the interior, excluding the hypothesis that someone could have placed it from the exterior.

The blood type is AB, similar to the one found in the Host of Lanciano and in the Holy Shroud of Turin. A microscopic analysis of magnification and penetration reveals that the superior part of the blood has been coagulated since October 2006. Moreover, the underlying internal layers reveal, in February 2010, the presence of fresh blood.

The event does not have a natural explanation.

Read more:
5 of the most remarkable incorrupt saints