Archbishop of Tangier, Morocco: “Immigrants are nothing to fear” 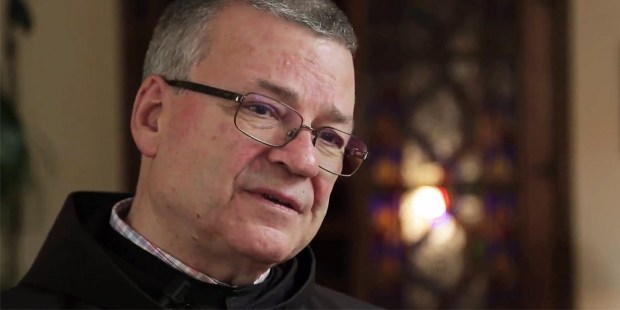 He is one of the bishops most familiar with immigration. He lives in North Africa. Only 14 kilometers [about 9 miles] separate his diocese on the Black Continent from Europe, a place of hope. In this interview, Archbishop Santiago Agrelo, OFM, speaks without holding anything back. “The Christ of our Eucharistic celebrations doesn’t make noise, doesn’t dirty things up, and doesn’t smell… The truth is, He gets in the way so little that we don’t even pay much attention to Him,” he points out.

People are afraid of immigrants, and so they close their ports and borders. Are we becoming dehumanized?

Immigrants are nothing to be afraid of. Anyone can prove it by getting to know the first immigrant he or she happens to meet.

What we fear is what is different, unknown, and above all, what has been deformed and demonized in our minds by politics and the media.

If we were not to identify immigrants by the racial characteristics of their faces, by the color of their skin, or, when they are poor—which is a different kind of emigrant—by the indigence of their clothes, nobody would say that they are afraid of immigrants. But we focus on what makes them different, and that element, to our eyes, dehumanizes them and deprives them of their inalienable human dignity. We reduce them to the dehumanized category of being illegal, undocumented, or invaders.

In some cities, churches have opened 24 hours a day for the poor, for refugees… and many people complain about the lack of hygiene, the noise, the safety risks… What would I say to them?

I’ve gotten to know up close the inhabitants of the forests around the autonomous cities of Ceuta and Melilla. I know the destitution, the illnesses, the mutilations, and the infections suffered by those who wait there for an opportunity to enter Spanish territory. I know of their hunger and thirst, their lamentable hygiene, their bare feet on forest paths, their rags of clothing, their shoes that once were and are no more, their exposure to the elements, their…

If someone knows about all this, then they understand that a refugee camp, even if it is a quagmire, even if there is nothing under the tents but a little shelter, a guaranteed meal, and water to drink and bathe, is like arriving at a hotel.

So, imagine what a church must be like for them: a palace!

I understand: the Christ of our Eucharistic celebrations doesn’t make noise, doesn’t dirty things up, doesn’t smell… The truth is, He gets in the way so little that we don’t even pay much attention to Him. And so, when He happens to present Himself to us as noisy, dirty, and smelly, we are not used to seeing Him in that form, and we don’t recognize Him. And if we don’t recognize Him, it’s natural that we protest.

But someone should explain to Jesus’ disciples that, while the Risen Christ doesn’t smell, doesn’t bleed, doesn’t eat, doesn’t drink, and doesn’t need water to bathe, Christ Crucified—the very same Lord—smells, bleeds, eats, drinks, and needs water for personal hygiene. And we should emphasize that, in order to live, the Risen Lord gets by just fine without us; but the Crucified Lord, in order to live, needs us more than ever.

If we, who call ourselves Christians, had a simple understanding of life and faith, if we had clear vision to see Christ in those in need, if we felt as obliged to care for Christ in the poor as we do to venerate Christ in the Eucharist, then the poor would suffer much less and the Eucharist would be much more honored, venerated, and adored.

You are a man of hope, and this shows in what you do and preach. How can you conserve your joy faced with such desolation?

I don’t know what it will be like in heaven, when everything is perfected. Here, happiness is bound to what is imperfect, what is scarce, what is unexpected…

Drying a tear, binding a wound, relieving suffering, mitigating hunger or thirst, clothing the naked, drying a drop of sweat, giving a hug, making fears and sadness retreat or lose ground… These are all joys that are born from almost nothing, and they stay in your soul in the form of light, peace, and hope.

There are more and more indiscriminate attacks by ISIS. What is your perspective in the face of the phenomenon of terrorism?

Within that question are various concepts that could seem well-defined, but which really aren’t: “attack,” “indiscriminate,” “terrorism…” There is no accepted definition of “terrorism” because there is no possible definition that doesn’t also apply to so-called civilized countries—the United States of America first of all.

If, by terrorism, we mean “perpetrating terror against the civilian population,” it’s obvious that the terror suffered by the citizens of European countries is insignificant—without foundation—compared to the terror suffered for many years now by entire countries such as Syria or South Sudan, and by a scandalous number of African countries.

And while nations and individuals, in order to resolve their differences and problems, continue resorting to violence, this womb will continue to give birth to violent people.

It’s a cultural question, and the Church is called to carry out a role in creating a non-violent culture. The Church must become the carrier of a clear message: Violence, never.

Finally, as a Franciscan, as a bishop, and as a human being, do you think we are better as a society than we were 100 years ago?

I don’t know if we are better. But I do know that we are more aware of the evils that afflict humanity. I believe that we read the Gospel of Our Lord Jesus Christ with greater simplicity, and that His message resounds more clearly and purely in our interior.

I believe that the world will breathe better if we, who are believers, take the Gospel seriously. I believe that joy will be multiplied inasmuch as those who accept the new commandment of love are also multiplied. The duty of creating a better society is in our hands. It’s a matter of love.