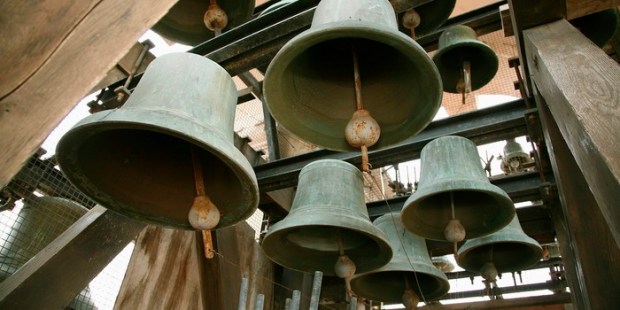 No, they are not called “Quasimodo and Esmeralda”

Much has been written on the horrors committed in the name of equality, freedom, and fraternity during the French Revolution. Although nobody doubts that 1789 definitely changed the face of the world, and that from it a new perspective emerged on humanity and its fundamental rights (some would say only to die immediately right after, in the guillotine). What is less known is that the bells of the cathedral of Notre Dame played an interesting yet sad role in the revolution. The revolutionaries seized all the cathedral’s bells but one, melting them to make cannons, bayonets and more guillotines. Only in 2013 did the cathedral finally manage to replace them all. These new bells, like the original ones, have names, and have been blessed.

New bells are washed with holy water and then anointed inside and out with chrism oils. Then it is prayed:

“Lord, from the beginning of time your voice has called to us, inviting us to communion with you, teaching us the mysteries of your life, guiding us on the way to salvation. With silver trumpets Moses summoned Israel to gather as your people. Now you are pleased that in the Church the sound of bells should summon your people in prayer. By this blessing accept these bells into your service. May their voice direct our hearts toward you and prompt us to come gladly to this church, there to experience the presence of Christ, listen to your word, offer you our prayers, and both in joy and in sorrow be friends to one another. We ask this through Christ our Lord.” – From the Book of Blessings

A very brief video of the blessing of the bells at Notre Dame: