Interview: The husband of Chiara Corbella on his wife’s sacrifice and possible canonization 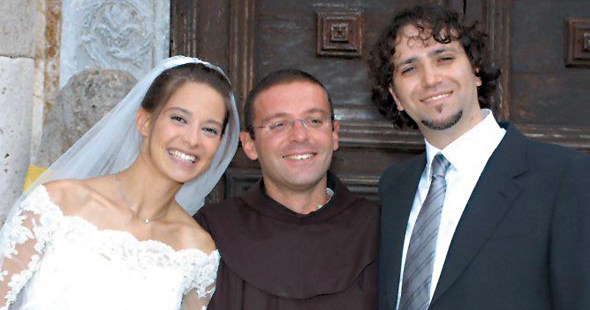 Enrico Petrillo: “More than feeling that the world was against us, we knew that we were with the Lord.”

With that peace, they received Davide Giovanni, who, 38 minutes later, “was born into Heaven.” In March of 2010, Chiara writes that little Davide “has overthrown our ‘right’ to want a son who would be for us, because he was only for God.”

In both cases, Enrico assures us that, despite the malformations of his children, the word “abortion” never crossed his mind. “For us, the problem of choosing didn’t exist.”

“But, did this suffering turn you against the world?” we ask him. “More than feeling that the world was against us, we knew that we were with the Lord. When you ask yourself about that, it is as if you open a dialogue and the possibility of something more.”

After both experiences, many recommended they abandon the idea of having biological children. Others advised them to wait. But in Chiara’s words, “the idea of waiting made us sad.”

Once more, they didn’t let much time pass before Chiara became pregnant again. As the pregnancy progressed, she one day noticed a small ulcer on her tongue, but she didn’t give it any importance. However, the sore began to grow along with her womb.

They were expecting Francesco, who—according to all the tests—was developing without any problems. When we visit Enrico in his house, Francesco has already been asleep for a while.

Enrico tells us that he usually sings his son a lullaby, “Dolce Sentire”—the version of Saint Francis of Assisi’s Canticle of Creation from the soundtrack of Franco Zeffirelli’s movie Brother Sun, Sister Moon.

Assisi plays a very important role in the couple’s history. That’s where they met their spiritual director, Father Vito, who continues to guide Enrico today.

Enrico says that, without Assisi, their marriage would probably never have taken place. In March 2012, they brought little Francesco to the Portiuncula, to entrust him to the Virgin Mary. Little Maria Grazia Letizia and Davide Giovanni were both “born to heaven” wearing a Tau [the kind of cross used by St. Francis ] around their neck.

We go back to 2011. Chiara’s wound on her tongue kept growing, and after undergoing some tests, she has an operation in March. Carcinoma. Faced with this situation, Chiara didn’t complain; in fact, she faced this new trial with a smile.

“Despite the cross we were experiencing, we felt the Lord’s presence close to us; because of that, we laughed and joked up to the last moment. That was a surprise for us too. Chiara always smiled,” Enrico remembers.