How being a feminist brought me closer to God 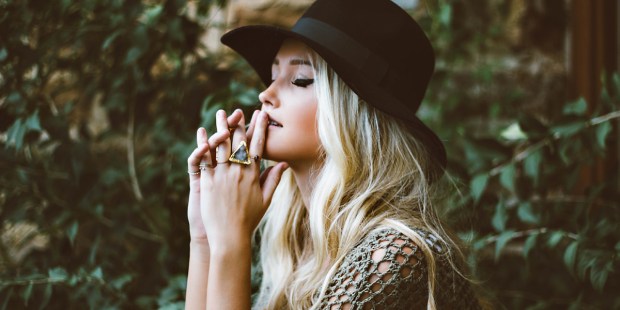 Turns out, what I thought was weakness is actually strength.

Most people probably wouldn’t get so worked up over water bottles. But as a young feminist, when my grandma told me to let my younger brother carry the heavy case of Aquafina, I was livid. “Seriously?!” I thought, “Why does she think I’m so dainty and weak?!”

Feminism was in my blood from the beginning, it seems. In kindergarten, when a boy tried to chase me around the playground, I ran for a bit and then stopped, paused, and confronted him. “Why are you chasing me?”

I was never one to be mistaken for meek and mild.

My college applications essay was about joining an all-male game of baseball at a relative’s graduation party. I proudly described how I refused to sit idly by with the other girls, and instead stood tall as I approached the pitcher and asked which team I should join. I was determined not to let being a woman hold me back from anything. I was proud to be a woman – a woman who could be just like the guys.

When I started dating, things changed. I began to be confronted with the depth of my own emotions. St. Edith Stein wrote that, “The strength of woman lies in the emotional life.” And yet, these emotions didn’t make me feel strong at all – they just made me feel … vulnerable.

Like most modern feminists, being vulnerable was not exactly the image I was pursuing for myself. I was a feminist. That meant I was powerful, and strong. To be vulnerable was to be fragile and worst of all – weak. So I avoided those feelings; I hid them in my increasingly fragile heart.

At a certain point, I couldn’t take it anymore. I couldn’t hold it in. I wasn’t strong. I was weak. I was vulnerable. Honestly? I was a mess.

By some miracle, and maybe a bit of luck (or rather, grace) I decided to seek out God. My desperate logic reasoned that, since I was already vulnerable, why not let Him join me there, too? I was finally weak enough to be … humble. Maybe that’s what St. Paul meant when he wrote, “Power is made perfect in weakness… for when I am weak, then I am strong” (2 Cor. 12:9).

Read more:
4 Things I want my daughter to know about being ‘feminist’

Feminism, by its definition, is the belief that men and woman are equal. But in those moments of vulnerability, God revealed something to me – I didn’t believe that. In understanding emotions and vulnerability as a weakness, I saw these feminine qualities as something that made women less.

So it turns out God was a much better feminist than me, after all.

During this period of my life, I stumbled into a whole new world of thought – Catholic feminism. This wasn’t the modern feminist movement that also saw femininity as weak and championed women turning themselves into poor imitations of men. No, this breed of feminism challenged me to acknowledge that I wasn’t “just like the guys” and that perhaps this was my strength.

People like St. Edith Stein, St. John Paul II, Helen Alvare, Lisa Cotter, Catherine Pakulak, and Erika Bachiochi all nourished this growing hunger I had for truth – for the truth about women and the truth about myself.

He taught me that He knew me better than I knew myself.

Our God is a loving God. He is a trusting God. He trusted women with the most vulnerable part of Himself – His own son. All so that He could meet us in our own vulnerability, too. To help us become the strongest, most joyful, most authentic versions of ourselves.

Now I finally trust Him to help me do that.

This article first appeared on femcatholic.com and is reprinted here with permission.