Why do priests (and deacons) wear a stole? 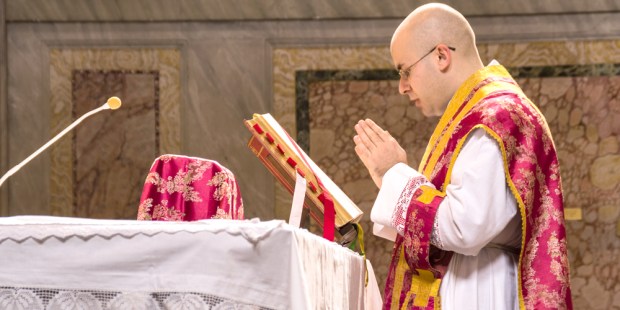 The small piece of fabric is one of the most important vestments worn by ordained clergy.

One of the most significant vestments a member of the ordained clergy wears is a simple strip of material called a stole.

The Vatican’s Office of Liturgical Celebrations explains, “The stole is the distinctive element of the raiment of the ordained minister and it is always worn in the celebration of the sacraments and sacramentals. It is a strip of material that is embroidered, according to the norm, whose color varies with respect to the liturgical season or feast day.”

The word “stole” comes from the Latin stola, or “garment.” It was an ancient Roman scarf-like garment that was used to denote members of the imperial hierarchy and was restricted to a specific class of individuals.

The word stola is also used in the Latin Vulgate on certain occasions. For example, it is found in the following passage from Luke 15:22 regarding the garment to be worn by the Prodigal Son, “dixit autem pater ad servos suos cito proferte stolam primam et induite illum et date anulum in manum eius et calciamenta in pedes” (“And the father said to his servants: Bring forth quickly the first robe, and put it on him, and put a ring on his hand, and shoes on his feet”).

Sometimes it is connected to the “yoke of Christ,” but that designation is now associated with the chasuble.

Read more:
Why do priests wear a chasuble at Mass? And what’s a chasuble?

Currently the stole is referred to as the “stole of immortality,” as the following prayer indicates.

(Lord, restore the stole of immortality, which I lost through the collusion of our first parents, and, unworthy as I am to approach Thy sacred mysteries, may I yet gain eternal joy.)

It is a vestment that identifies members of the ordained clergy and is worn by priests, deacons and bishops.