Pope Francis: “Christians love, but they are not always loved” 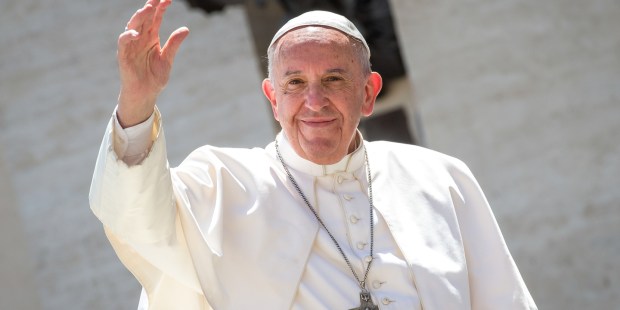 VATICAN CITY — Christians may be called to love, but they should not expect to always be loved, Pope Francis said on Wednesday.

In fact, he said, if Christians are living their faith, they should expect opposition.

Speaking to the faithful and pilgrims gathered in St. Peter’s Square, for the final Wednesday audience before taking a customary summer pause, the pope said Christian men and women are called to “go against the tide,” and may even be “hated” for practicing and professing their faith.

“Persecution,” he said, “is part of the Gospel.” Yet, he reminded Christians, we should live in hope, knowing that “there is Someone who is stronger than evil,” who sees our hearts and is always listening to us.

“No human suffering, not even the most minute and hidden, is hidden from God’s eyes,” the pope said, recalling Jesus’ words in the Gospel: “Even the hairs of your head are all numbered” (Mt 10:30).

Read the pope’s catechesis on Christian hope below.

Today we reflect on Christian hope as the strength of martyrs. In the Gospel, when Jesus sends his disciples on mission, he does not delude them with mirages of easy success; on the contrary, he warms them clearly that the proclamation of the Kingdom of God always involves opposition. And he also uses an extreme expression: “You will be hated — hated — by everyone on account of my name” (Mt 10:22). Christians love, but they are not always loved. From the beginning, Jesus places us before this reality: to a greater or lesser extent, confessing the faith takes place in an climate of hostility.

Christians are therefore men and women “against the tide.” It is normal: since the world is marked by sin, which manifests itself in various forms of selfishness and injustice, those who follow Christ walk in the opposite direction. Not in a polemical spirit, but in fidelity to the logic of the Kingdom of God, which is a logic of hope, and which translates into a way of life based on the instructions of Jesus.

And the first instruction is poverty. When Jesus sends his disciples on mission, he seems more concerned about “divesting” than “clothing” them! Indeed, a Christian who is not humble and poor, detached from riches and power, and above all detached from himself, does not resemble Jesus.

A Christian travels along his road in this world with the essentials for the journey, but with his heart full of love. The true defeat for him or her is to fall into the temptation of revenge and violence, by responding to evil with evil. Jesus tells us: “I am sending you out as lambs among wolves” (Mt 10:16). Therefore, without jaws, without claws, without weapons. Instead, the Christian has to be prudent, and sometimes shrewd: these are the virtues accepted by the logic of the Gospel. But never violence. To defeat evil, we cannot share in the methods of evil.

The Christian’s only power is the Gospel. When times are difficult, we must believe that Jesus is standing before us and does not cease accompanying his disciples. Persecution is not a contradiction to the Gospel but is part of it: if they persecuted our Master, how can we hope that to be spared the struggle? But in the midst of the whirlwind, a Christian must not lose hope, thinking he has been abandoned. Jesus reassures his disciples saying: “Even the hairs of your head are all numbered” (Mt 10:30). As if to say that no human suffering, not even the most minute and hidden, is hidden from God’s eyes. God sees, and he surely protects; and he will grant his redemption.

Christians therefore have to always to be found on the “other side” of the world, the one chosen by God: not persecutors, but persecuted; not arrogant, but meek; not snake oil salesmen, but submitted to truth; not imposters, but honest.

This fidelity to the style of Jesus — which is style of hope — even to death, would be called by a most beautiful name by the early Christians: “martyrdom,” which means “witness.” There were so many possibilities in their language: it could have been called heroism, abnegation, self sacrifice. Instead, the first Christians called it by a name fragrant with discipleship. The martyrs do not live for themselves; they do not fight to affirm their own ideas, and they accept having to die only out of fidelity to the Gospel. Martyrdom is not even the supreme Christian ideal, because charity stands above it, that is, love of God and love of neighbor.

The Apostle Paul says it so well in the hymn to charity: “If I give away all I have, and if I deliver my body to be burned, but have not love, I gain nothing” (1 Cor. 13:3). The idea that suicide bombers can be called “martyrs” is repugnant to Christians: there is nothing in their purpose or end that can be likened to the attitude of the children of God.

At times, reading the stories of so many martyrs of yesterday and today — who are more numerous that the martyrs in early times — we are astonished by the strength with which they faced trial. Their strength is a sign of the great hope that animated them: the certain hope that nothing and no one could separate them from the love of God given to use to Jesus Christ (cf. Rm 8:38-39).

May God always grant us  the strength to be his witnesses. May he grant us [the grace] to live in Christian hope especially in the hidden martyrdom of doing our daily duties well and with love.