High-spirited, mischievous, prank-pulling … and a saint 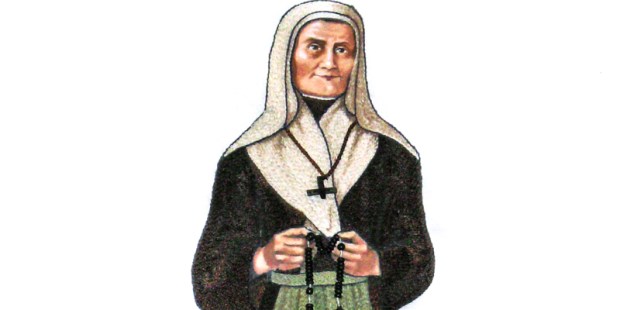 Pretended drunkenness was one of Blessed Catherine Jarrige’s favorite ruses.

Blessed Catherine Jarrige (1754-1836) was the youngest of seven children born to a poor farmer. She was a sweet child, called “the little nun” by those who knew her, but was fond of practical jokes and general innocent naughtiness. There was little time for either when she turned nine and began work as a servant, nor when she trained as a lacemaker at 13. Despite the hard work that filled her days, though, Catherine always had time to dance, particularly the traditional Bourrée.

Catinon, as she was called, was a woman full of life and joy, but she was more than just a girl who loved to dance. When she got off work, she would walk the streets begging alms for the poor. Gradually, her love of the Lord and of the poor led her to imitate St. Catherine of Siena, her patron saint, and take vows as a lay Dominican. “Catinon Menette” (Cathy the little nun) stopped dancing—not without regret—but her mischievous spirit remained and would serve her well during the difficult years to come.

In 1789, the French Revolution began. By the end of 1791, priests who refused to pledge their allegiance to the anti-Catholic government (“non-juring” priests) were imprisoned; within two years, the sentence became immediate death for all non-juring priests and anyone found helping them.

Catherine’s hour had come. This was not a time for pious church ladies (though their prayers must surely have helped). This was a time for loud, powerful, brazen women. Catherine had been born for this; she set to work to save the lives of every priest she could. She created an underground system to hide priests and smuggle them where they were needed. She provided them with vestments and with bread and wine to celebrate Mass, brought them babies to baptize, led them to families in need of sacraments, and hid them in the forest.

It wasn’t always easy, of course. Sometimes, the priests would move undetected under cover of darkness. Other times, they came face to face with soldiers of the Revolution. Once, Catherine is said to have doused a priest with wine and then screamed at him as he stumbled past a soldier.

“Citizen, if I had a wife like that, I’d drown her in the nearest river,” the soldier called in sympathy. “Citizen, so would I!” came the response.

Pretended drunkenness seems to have been one of Catherine’s favorite ruses, as she was also known to play the part herself, hurling “drunken” abuses at laughing soldiers as priests sneaked behind them. It seems a childhood of mischief served her well as Catherine’s tricks were stunningly successful.

For nine years, Catherine worked to protect the priests of her region and is credited with saving the lives of thousands of priests. Only one slipped through her grasp and the fearless little Dominican walked boldly to the gallows with him. After he died, Catherine took the blood of this priest, Venerable François Filiol, and applied it to the eyes of a blind child whose sight was immediately restored.

Catherine was arrested and imprisoned more than once, but she was so popular with the people that each time she was released for fear of what they would do if she were killed. Given how very inclined the revolutionaries were to send people to the guillotine, this speaks volumes about her influence.

With all the lives she saved and all the authority she wielded, Catherine was most proud of the fact that over a stretch of two years there was not one person in her town who went unbaptized or died without the sacraments. In a time when being a priest was a capital crime, this was nothing short of miraculous.

Ten years after the persecution of the Church began, it ended. Her work finished, Catherine again began to serve where the need was greatest: begging for the poor. By this time, her reputation was so great that she had no trouble obtaining what she needed. She was respected by laity and clerics alike; one bishop visiting her town even insisted on receiving her blessing—the blessing of a laywoman—before he would consent to give her his.

To the day of her death at 81, Catherine remained humble, despite the honors the world attempted to bestow on her. All she wanted was to serve the Lord and his people, and she did just that. On July 4, the feast of Blessed Catherine Jarrige, let’s ask her intercession for strong and spirited women, that they would follow the Lord just as they are, rejoicing in who God made them to be and not attempting to fit into some other mold. Blessed Catherine Jarrige, pray for us!