VATICAN CITY — Do you sometimes feel weighed down or unfree after making a mistake or falling into sin?

Today Pope Francis said the “true enemy” that prevents us from being interiorly free is “sin.” But, he stressed, we can be “freed from the chains of evil” through the Sacrament of Reconciliation.

Addressing the faithful and pilgrims from the window of his study in the Apostolic Palace, on the Solemnity of Sts. Peter and Paul, the pope reflected on how the Lord miraculously liberated the two Apostles from prison and persecution.

If we turn to the Lord in the Sacrament of Penance, the pope said, he will liberate us interiorly through the power of his grace, and lift the weight we experience from sin.

Today’s Angelus address followed a solemn Mass in St. Peter’s Square, celebrated together with the five cardinals whom the pope created yesterday at an ordinary public consistory.

Read the pope’s reflection below. 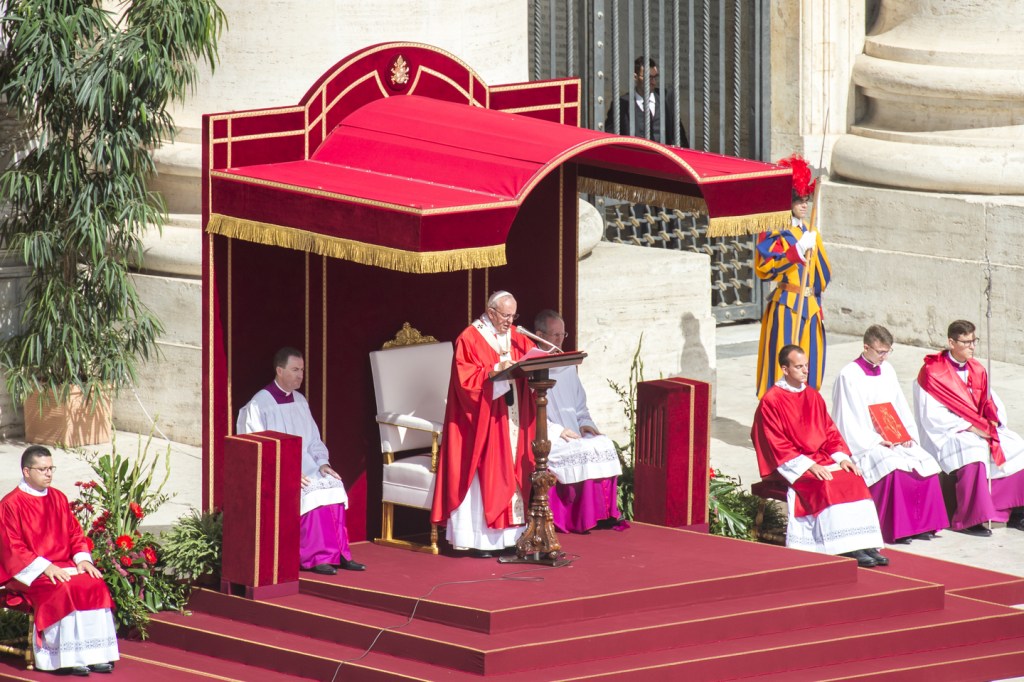 Good morning. The Fathers of the Church loved to compare the holy Apostles Peter and Paul to two columns, on which the visible construction of the Church rests. Both sealed with their own blood the witness they rendered to Christ through preaching and service to the nascent Christian community. This witness is highlighted in the biblical Readings of today’s liturgy, readings which indicate the reason for their faith, confessed and proclaimed, and then crowned with the supreme proof of martyrdom.

The Book of the Acts of the Apostles (cf. 12:1-11) recounts the event of Peter’s imprisonment and subsequent liberation. He had already experienced aversion to the Gospel in Jerusalem, where he had been imprisoned by King Herod “intending to bring him before the people” (v. 4). But he was miraculously saved so he could complete his evangelizing mission, first in the Holy Land and then in Rome, putting all his energy at the service of the Christian community.

Paul, too, experienced hostility from which he was liberated by the Lord. Sent by the Risen One into many cities to pagan peoples, he encountered strong resistance by those of his own religion and by the civil authorities. Writing to the disciple Timothy, he reflects on his own life and missionary journey, as well as on the persecutions he endured for the sake of the Gospel.

These “liberations” of Peter and Paul reveal the common journey of the two Apostles, who were sent by Jesus to announce the Gospel in difficult and, in certain cases, hostile environments.

Both, through their personal and ecclesial experiences, show and tell us, today, that the Lord is always by our side. He walks with us; he never abandons us. Especially in time of trial, God extends his hand to us; he comes to our aid and liberates us from the threat of our enemies.

But let us remember that our true enemy is sin, and the Evil One who urges us on to it. When we are reconciled with God, especially in the Sacrament of Penance, receiving the grace of forgiveness, we are freed from the chains of evil and alleviated from the weight of our errors. Thus we can continue along of path as joyful heralds and witnesses of the Gospel, showing that we are the first to have received mercy.

To the Virgin Mary, Queen of the Apostles, we address our prayer, which today is especially for the Church in Rome and for this city which has Peter and Paul as patrons. May they obtain for [the Church and city] spiritual and material well being. May the goodness and grace of the Lord sustain the Roman people, that they might live in fraternity and harmony, making the Christian faith shine forth with the intrepid ardor of Saints Peter and Paul.