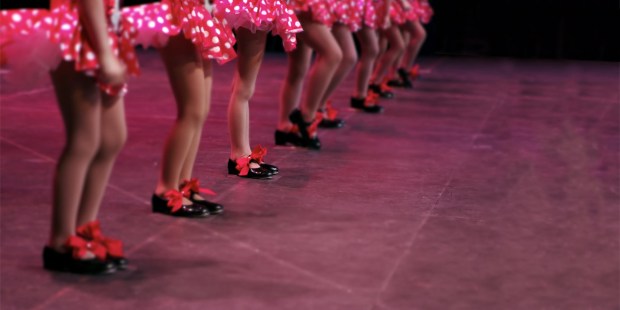 Sexualizing girls and women is not empowering — in ballet class or in the pages of a magazine.

Four years ago, we pulled our two daughters out of dance. They both loved dance and we wanted to give them the chance to learn grace, strength, rhythm, and all the other benefits that come from dancing, despite how expensive it was.

What they mostly learned, though, was how to sashay and shake their tiny heinies. Oh, and they also got a good helping of body angst, since their toddler-and-little-kid bodies didn’t match the wrapped-present halter tops and French maid costumes.

Haley Stewart had a similar experience with her daughters, which she wrote about at her blog Carrots for Michaelmas.

I’m just gonna state the obvious that shaking your butt at the audience isn’t ballet, not by any stretch of the imagination. And maybe I’m in the minority here, but I don’t think sexualizing small children is “cute.” Cute is little ballerinas chasse-ing across the stage and plie-ing at the wrong time and you say “aw.” Cute is not sexualized movement imposed on small children who don’t understand what they’re doing.

Haley ended up pulling her daughters out of class after one of them expressed her discomfort to the teacher, who told her she had to shake her booty in front of the mirror even though it made her uncomfortable. Like us, Haley and her husband turned to martial arts in lieu of dance.

In taekwondo, my kids actually are learning grace, strength, and rhythm, in addition to countless other physical and mental virtues. More importantly, they are learning a way to re-frame body image.

Read more:
80% of Parents Think Their Kids are Growing Up too Fast: Is Technology to Blame?

My oldest daughter is set to compete at nationals in a few weeks, and everyone registers in a certain weight class. We’ve been discussing weight classes and what they mean lately, since she’s right on the cusp of hers and we had to decide if it would be better to try to keep her weight steady or have her put on a few pounds.

She’s beginning to understand and talk about weight as an aspect of athletic performance rather than appearance. Featherweight and lightweight fighters are faster and more agile but more susceptible to getting knocked down (which is a penalty in sparring). Welterweight and heavyweight fighters are slower but steadier, and they tend to kick harder but not as high.

When she talks about her own weight now, she speaks in terms of what her body is capable of, rather than what it looks like.

Mayim Bialik recently posted a Facebook video explaining why the current trend of plus-size models taking off their clothes in the name of empowerment isn’t actually empowering at all:

Why Is Everyone Getting Naked?

Anyone else having issues with celebs disrobing in the name of empowerment? I'm sure you're not surprised that I do and I think you should, too! Is the way to inspire young girls' confidence to equate nakedness with empowerment? Today's vlog discusses it all!Video by L.e. Doug Staiman

It’s a great video and you should watch the whole thing, but here’s the key point she makes:

I think the trap that we’re falling into is that we start to equate empowerment not with strength or intelligence or confidence, but with sexiness. So even if you are an athlete or an actor or a scientist, or any kind of intelligent, accomplished woman, the message that we’re sending, especially to young girls, is above all else be sexy … The message is, I should be celebrated, and the way that I do that is by presenting myself as a sexualized object.

That is not empowering, it’s reductive. It’s saying the same old thing — that the sum total of a woman’s worth is how sexually desirable she is.

This is a nasty lie, and women have been fighting against it for centuries. It isn’t that our inherent sex appeal is a bad thing — it’s not! It’s part of how love, how commitments are forged and babies are made. But it isn’t the only thing we have to offer, or the entirety of who we are.

As parents, we don’t have to sit by and allow our daughters and sons to learn, from far too early an age, that girls are sexualized objects rather than full, complete, amazing human beings. We’re the ones who pay for the dance classes and the magazines, the clothes and the movies — we can (and should) choose all of those things carefully and wisely, keeping in mind that we’re forming young women and young men, not simply entertaining children.