The Catholic saint behind the Jägermeister logo 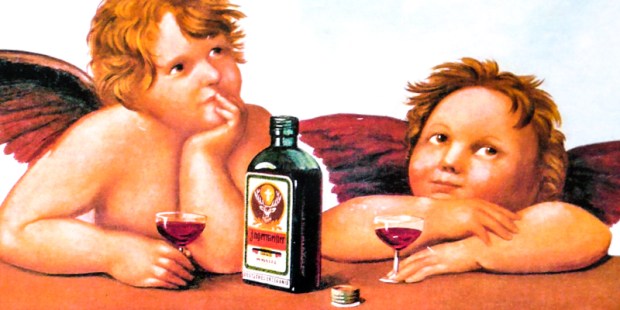 Jägermeister is a fantastic alcoholic drink that tastes like licorice and comes in a bottle that looks like 1800s medicine. If you’ve ever seen the bottle, you are familiar with the emblem of a shining cross over a stag’s head, but did you know where that symbol comes from?

UCatholic reminds us of the popular explanation, “O’Deer God,” arrived at through the Pictionary method: a cross (God) and a deer’s head (Deer) encapsulated within a giant circle (O’). This is clever, but not the case. The symbol is really referring to the story of St. Hubert.

St. Hubert was a noble of one of the great houses of the Merovingian kingdoms. Shortly after his wife died in childbirth, his grief led him to go on an extended hunt:

On Good Friday morning, Hubert was in pursuit of a magnificent stag when suddenly the animal turned to face him. He was in awe of a Crucifix between its antlers, when he heard a voice say to him: “Hubert, unless thou turnest to the Lord, and leadest an holy life, thou shalt quickly go down into hell.” Hubert knelt down and replied, “Lord, what wouldst Thou have me do?” He received the answer, “Go and seek Lambert, and he will instruct you.” The vision changed the life of Saint Hubert, who devoted his life to the Faith and became the Bishop of Liège in 708, given the title Apostle of the Ardennes.

Jägermeister, which means “Hunt Master,” took the symbol in reference to St. Hubert. They explain this on their website:

Only a legendary stag’s head would suffice, one with a beaming cross between its antlers. The stag that appeared to a wild hunter and converted him to Christianity. The same hunter who would later become the patron saint of all hunters: Saint Hubertus.

This stag remains today, as it always has been, the Jägermeister trademark. A symbol of the preservation of our quality and tradition.

Jägermeister is an enjoyable drink but one that can hit you quickly. It’s worth noting that Catholicism has a patron saint for everything. If you plan on partaking, you may want to acquaint yourself with Saint Bibiana, the patron saint of hangovers.