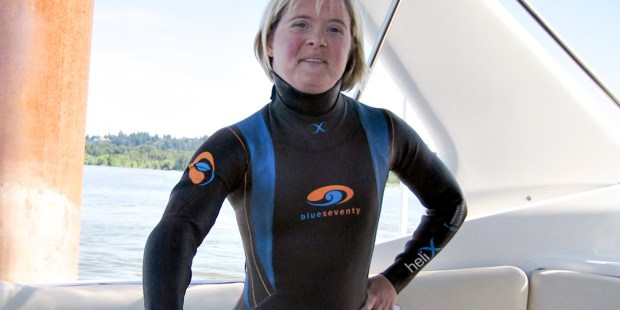 Karen Gaffney will address an anti-abortion rally in Dublin to show attendees why “All Lives Matter.”

Swimming the English channel is no mean feat. Navigating the cold waters, facing huge waves, extreme winds, and let’s not forget the odd jellyfish sting. It’s every long-distance swimmer’s ultimate challenge and one taken up by Karen Gaffney, the first person with Down syndrome to complete the relay swim back in 2001. Yet this has not been Gaffney’s biggest challenge in life. She’s spent her life confronting the obstacles put up against those with disabilities, determined to show the world that having Down syndrome is not a justifiable reason to end a pregnancy. In fact her message is quite simple: All Lives Matter.

Her work with the Karen Gaffney Foundation, which is “dedicated to championing the journey to full inclusion for people with Down syndrome and other disabilities,” has earned her an honorary doctorate in Humane Letters from the University of Portland in 2013, the first living person with Down Syndrome to receive such a distinction. Yet there is still no stopping this high achiever. On July 1st, Gaffney will be addressing a huge crowd in Dublin’s Parnell Square at 2 p.m. (there’s just enough time to book your flight!), to spread her message that one little chromosome should not exclude a person from having an active part in society, or worse still, from not being given the chance to be born into this world.

Gaffney pointed out in TED talk: “Imagine that here we are reversing the damage caused by institutions, removing barriers to education, making inroads into a full and inclusive life for people like me, and still we have those who say we shouldn’t even be born at all.” She notes how there is an ever-increasing number of people with Down syndrome making worthy contributions to society. “I believe that Down Syndrome is a life worth saying ‘yes’ to. It is a life worth saving. Every life has value, every life matters, regardless of how many chromosomes you have,” she adds.

Her Dublin address is very timely, with the new Taoiseach, Leo Varadkar, saying that Ireland will hold a referendum next year on abortion. In a country that has always protected the rights of the unborn, “Polls show that Irish people are increasingly concerned about what legalizing abortion means for people with disabilities.” And they’re right to be concerned: Its neighboring country, Britain, has a 90 percent abortion rate of babies with Down syndrome, and tragically this figure has reached 100 percent in Iceland.

Thankfully, support for abortion on grounds of disability has fallen substantially in Ireland since January 2016: from 61 percent to 36 percent today (although different polling services were used). However this figure is still too high. Let’s hope that Gaffney can help galvanize support from a public that can only be impressed by this strong, determined, and so very abled woman, who has faced challenges head on that the most accomplished of us would turn away from.