Decoding ‘The Red Wheelbarrow’–The impact of a 16-word poem 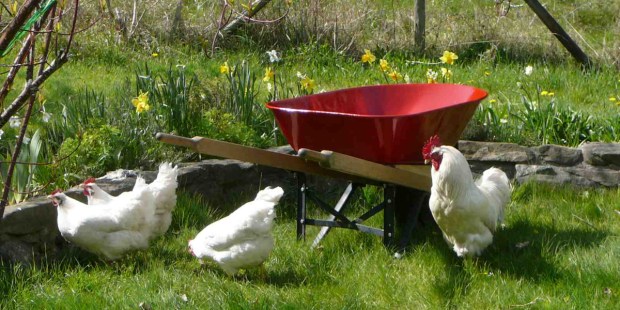 Walking through these small poems with Anna O’Neil has become a delightful and insightful treat.

so much depends
upon

beside the white
chickens.

I’m a little embarrassed to be here talking to you about this poem today, because I’ve spent years of my life loudly complaining about how annoying “The Red Wheelbarrow” is. It just seemed so lazy! Williams didn’t even bother to use capital letters or rhymes, and good grief, you don’t need to have much poetic skill to write cryptic prose about a muddy backyard, do you?

Maybe you do. Have you ever heard how it’s astronomically harder to write good children’s literature than it is to write for adults? That’s because although you’re forced to use a simpler form, you’re not off the hook in terms of having something real to say. It’s hard to be vivid, exact, and profound, within the bounds of extreme simplicity.

So. Let’s start asking some questions. “What does depend upon a red wheelbarrow?” Williams isn’t telling, but that’s got to be on purpose. By leaving such a glaringly obvious question unanswered, he’s inviting us to figure the answer out on our own–not without clues, of course.

Next question: what’s with the strange, fragmented structure? Why those artificial line breaks? Three years ago, I’d have told you that without the stanza breaks, he never could have passed this off as an actual poem, and in a strange way, I was right. It’s not that the line breaks make a simple sentence look more poetic, it’s that the line breaks are actually essential to what makes this poem work. They force your brain to stop, even half-way through a word, dividing the scene into it’s components.

And for something that presents itself as so simplistic, there is a lot going on in each of those components. There’s the sharp contrast between red and white, as well as the interplay between the chickens, whose movements would be abrupt and chaotic, compared to the wheelbarrow–a tool meant to be moved, but which is just sitting abandoned, right now. There’s the relative warmth of the living birds compared to the cold, wet, metal. There’s the conspicuous absence of the laborer who had been using the wheelbarrow. A farmer’s livelihood depends on his animals, his tools, and especially the rain, so seeing those elements separated from him seems almost incomplete.

And it’s that sense of incompleteness, I think, which we are invited to challenge. We know as well as the owner of the wheelbarrow that so much does depend upon his wheelbarrow, since it does what his muscles cannot, and upon his chickens, who provide him eggs, meat, and manure. But can anything depend on an unused, rain-glazed wheelbarrow, standing in the yard?

It’s fascinating to me that the color of the wheelbarrow is mentioned. Williams isn’t just trying to make the scene seem more real, although the color does bring the wheelbarrow into sharp focus for us. The craftsman who made the wheelbarrow decided to paint it red. It doesn’t add to the tool’s use, but it’s pleasing, and shows that to somebody, more mattered than just the bare utilitarian function of the tool.

It’s easier for us to see chickens, and the rain too, through that lens. We know how useful they are, but we also know that they are beautiful. (Chickens, albeit, are beautiful in their absurdity–beady eyes, clawed feet, and glistening feathers–but beautiful nevertheless.)

So Williams has given us a glimpse of an absolutely mundane, ordinary, scene, which is actually bursting at the seams with details that tell us exactly what it is that depends on the red wheelbarrow, the glaze of rainwater, and the white chickens. Humanity depends on these things. Not just because of their tremendous usefulness, but because of their ordinary loveliness as well. It would be a poor world where nothing that was useful could also be beautiful, and Williams has show us how real beauty can exist without being extraordinary, and how beauty and use, in the natural world do not have to be at odds.